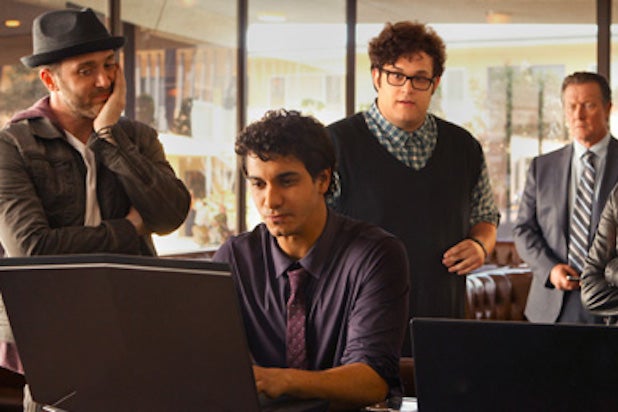 It’s lonely at the top … of the IQ chart.

At least, that’s one of the lessons that Nick Santora, executive producer of the upcoming CBS series “Scorpion,” hopes viewers will take away from the show.

Based on real-life brainiac/computer wizard Walter O’Brien, the series — which stars Elyes Gabel, Jadyn Wong, Eddie Kaye Thomas and Katharine McPhee — follows a group of super-geniuses who align themselves with the U.S. government to solve crises as they grapple with the alienation created by their superior intellects.

But “Scorpion” isn’t all woe-is-me, I’m-a-lonely-genius introspection. As one particularly riveting action sequence in the first episode makes clear, there will be plenty of thrills.

TheWrap spoke to Santora about the upcoming series, and what it takes to make a bunch of eggheads relatable to the general public (and vice versa).

TheWrap: The lead character of “Scorpion,” Walter O’Brien (played by Elyes Gabel) is unable to relate to human emotions. Does that pose a challenge in making his character relatable to viewers?
Nick Santora: It’s interesting trying to make a character relatable when he has trouble relating to the world, but what I found early on when I first sat down with the real Walter is that, while I’m clearly not a genius and most of the world are not geniuses, we can all relate to not fitting in. And that’s really where this show goes. The idea of being one in a billion — and Walter is actually 1 in 1.15 billion — is it is lonely. There’s only three people in the world with a higher IQ than Walter, so it’s that ubiquitous universal feeling that everyone’s had at some point, of ‘I don’t really fit in,’ and feeling a little bit like a misfit. And that’s where the show is very relatable.

How much of the show is actually based on Walter O’Brien’s life, and how much is creative license?
Some episodes are very much based on real adventures that Walter and his Scorpion team have had. Walter will often do business for clients who request confidentiality because they’ll be doing software updates for big companies and that’s their business, and Walter treats the confidentiality very seriously. He always says, “If I’m telling you about it, that means you can know.” But in that sense, we do get a great deal of interesting information from Walter. Of course, we have to take some creative license, but for example, the pilot is a real case that Walter handled. There were once planes in the air at a major metropolitan city that could not land because communication had ended. The planes couldn’t descend, because they could smash into another plane, they couldn’t land because they didn’t have visuals. It was a major, major issue, and Walter and his team solved the problem. And a lot of what happened in that pilot, including bringing in a young intern who really didn’t know much of anything to help. That kid in the pilot, that actually happened, except in real life he was a 20-year-old baggage handler, because Walter saw a strange-looking kid in an Anthrax T-shirt playing a videogame in baggage handling, and he said, “I guarantee you that kid knows how to code.” So sometimes truth is stranger than fiction.

The show deals a lot with topics of security and government, which are very much in the news these days. Will “Scorpion” take a “ripped-from-the-headlines” approach?
There might be some tech aspects to the show here and there, but it’s not really a tech show. One of the episodes deals with threats of biohazards spreading. We have episodes that deal with art heists and forgeries. We have an episode that deals with a casino robbery and casino security — all things Walter has dealt with in his real-life cases. But not everything is going to be NSA, techie. In fact I’d say, hardly any of it. However, the fact that things aren’t always as secure as you think they might be, as evidenced recently by some iCloud celebrity hacking … that shows you that there are always vulnerabilities, and Walter and his team are often able to exploit those vulnerabilities, whether they be in the tech world or the vulnerabilities in brick-and-mortar structures. They think they way other people don’t think. I guarantee you Walter could figure out how to break in and out of a Houdini box in five minutes — he’s legitimately brilliant.

That plane scene was a very expensive-looking stunt. Will there be more of that in future episodes?
Yeah, CBS has been so supportive of the idea that this show is going to have really big stunts and really big set pieces in every episode. I’ve been doing this a long time, and so has the whole team on this show. We’re able to make these shows come in on budget, still with amazing set pieces. That’s something that we kind of want to be the hallmark of this show. I do think that the plane set piece in the pilot, and I hate saying this because it sounds conceited but it was such a group effort that obviously I’m not saying it was my doing, but I do think it might be the greatest stunt that I’ve ever seen on television visually. It’s insane, and it just looks so great. And I and the whole team want to try to replicate that each week or something similar, and CBS is very supportive of that.

That scene is definitely a white-knuckle ride.
Listen, if you have Justin Lin [who directed the first episode], and you don’t give him something like that to do, you are wasting a resource.

CBS has done very well with procedurals and they’ve become a staple for the network. Where do you see “Scorpion” falling in that spectrum, if at all?
It’s not a procedural. I used that term at the TCA, “fun-cedural,” and it kind of trended for a little while. I think it’s a fun-cedural. It’s not a straight procedural — there is a ton of character in this show. I can’t write a show unless I spend, sometimes days on end, just writing pages and pages and pages of characters’ backstories, just so I know who they are. Some of that backstory might never make it into the show; a lot of it will. It’s so about character, it’s a show that’s very funny, and it just gets funnier. I mean, CBS, for the first time in over 60 years, is putting a non-traditional show in the half-hour comedy slot at Mondays at 9 o’clock, because they have such confidence in this show being funny and fitting their traditional comedy time slot. I don’t like to write straight drama, I don’t like to write straight procedural. This show does not fit in that mold. There is an adventure every week that will have a beginning, a middle and an end, but the characters and their interpersonal relationships will arc out and grow every single episode throughout the season, and those will be great rides.

The theme of this show is these characters feeling like outsiders because of their advanced mental ability. Will we see them acclimate to the non-genius portion of the human race as the season progresses?
Yeah, we want to see them struggle as they learn how to be human. Walter and his genius friends refer to non-geniuses as “humans.” Walter’s explained that because of the more than 20 percent differential in the weight and density in his brain as compared to standard human brains, that he is not the same species as us. And if you look up the definition of species, he’s right. So, these guys try to become more human. Because they know that the only way that they’re going to succeed in having a fulfilling life is being able to get along and interact properly with 99.999 percent of the world, they realize that they have to learn how to be more human or act more like the “normals” — which is how they also refer to us. And so that will be a journey for these guys is, but the fun part is, it’s not going to be easy. And they’re not always going to want to. And it’s often very frustrating for them. So it’s going to be a fun journey to go on with them.