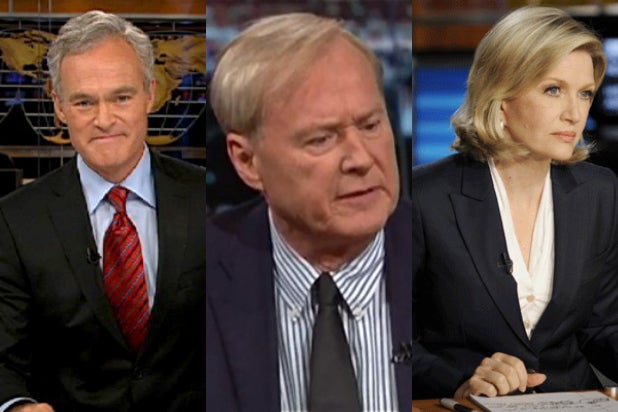 What do you want in a newscaster? Accuracy? Ethics? A voice of reason in times of duress?

Or do you just want to like your anchor?

If the last part is most important to you, then channel-surf no further than Scott Pelley of the “CBS Evening News.” The newsman topped TheWrap‘s list of most and least-liked newscasters, based on survey results from the Q Scores company.

Pelley’s 19 Positive Q Score, which measures likeability, helped him just beat the No. 2 guy, CNN’s Anderson Cooper, who had an 18. Cooper’s 56 Recognizability score places him among the highest on this list.

“Hardball” host Chris Matthews struck out with the lowest likeability score of all.

To create Q Scores, executive vice president Henry Schafer and his team provides a personality’s name and a brief description to more than 1,800 viewers. The viewers are asked if they recognize the person, and how they feel about him or her.

Compared to other TV personalities — from late-night hosts to morning hosts — newscasters tend to be less recognizable and less liked. (Maybe it’s a case of blaming the messenger?)

In third place among newscasters, a point behind the “AC 360” host, is Lara Logan, best known for CBS’ “60 Minutes.”

NBC newsman Brian Williams ties for fourth with CNN “New Day” hosts Chris Cuomo and Kate Bolduan, each of whom scored a 15. That number is still good enough to place them just above the average newscaster Q Score of 14, based on a study of 61 total newscasters by the metric company.

Everyone listed underneath Bolduan would be considered below average in terms of the measurement. That group includes Diane Sawyer, who is the only person more recognizable than Cooper, per the study. She scored a 13 for likeability.

The Fox News gang landed in the back half of the pack. Though Fox rules cable news ratings, Bill O’Reilly, Sean Hannity and Shepard Smith all scored below-average 10s.

Matthews had a lowly 6 Positive Q Score. Fellow MSNBCer Alex Wagner is just above her colleague, scoring an 8. Andrea Mitchell, Leslie Stahl and Dr. Sanjay Gupta round out the bottom five, each earning a 9.