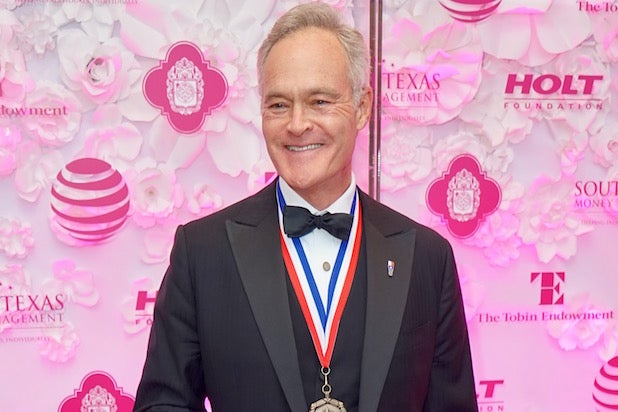 “CBS Evening News” anchor Scott Pelley was honored with the 2017 Texas Medal of Arts Award this week and used his speech as an opportunity to fight back against President Trump’s war on media, asking who else will be declared part of what the Trump administration calls the “opposition party.”

“I have to admit, I am a little disoriented. When I left New York, the President of the United States had declared us the enemy of the American People,” Pelley said, referring to a term POTUS tweeted last week. “By the time I got home to Texas, I had been mistaken for an artist.”

Pelley continued: “The president, declaring the media the enemy of the America people, can’t be taken all that seriously, as far as that goes. But it does raise the question, ‘How far does it go?'”

The “CBS Evening News anchor asked, “Is the next enemy of the American people a choreographer, painter, filmmaker, poet, a songwriter?”

In its ninth biennial year, the Texas Medal of Arts Awards is the Texas Cultural Trust’s signature event and the state’s most prestigious arts gala, honoring Texans who have made powerful contributions to the arts.

On Tuesday, Texas Gov. Greg Abbott presented Pelley with the award at the Governor’s Mansion at the Stars of Texas Brunch to kick off a two-day celebration that wrapped up with a gala at the University of Texas Bass Concert Hall.

On Thursday, White House chief strategist Steve Bannon mocked the media for how it “portrayed the campaign, how they portrayed the transition and now they’re portraying the administration,” saying, “it’s always wrong,” when speaking at the conference.

At CPAC, Trump continued his habit of echoing Bannon’s rhetoric when it comes to dealing with the media, which Bannon calls the “opposition party” on a regular basis.

Trump’s White House also blocked reporters from several news organizations from attending a press briefing on Friday, prompting CNN and the New York Times to speak out about the “unacceptable development.”

It will be interesting to hear what Pelley reports about the situation, as the Texan will provide full coverage tonight on “CBS Evening News.”