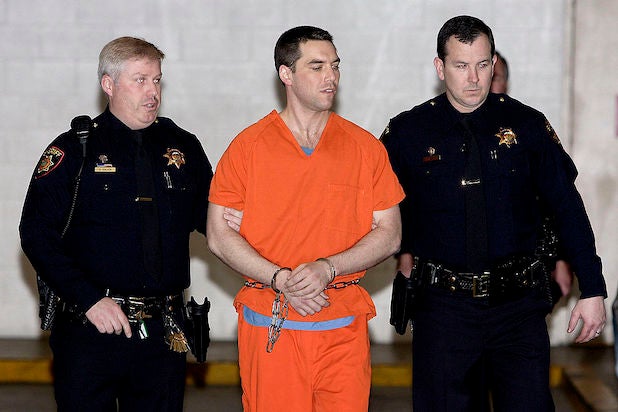 Scott Peterson, pictured in 2005, escorted by two San Mateo County Sheriff deputies as he is transported to San Quentin State Prison after being sentenced to death for the murder of his wife Laci and their unborn child. (Justin Sullivan / Getty Images)

Convicted murderer Scott Peterson will have to go through the penalty phase of his trial again, a California judge ruled on Friday according to KCRA, after being on death row for 15 years.

After having his death sentence overturned in August, Peterson appeared remotely from San Quentin prison during his court hearing in Modesto Friday, according to KCRA. Pat Harris, one of Peterson’s original defense attorneys, will represent him in the retrial.

NBC News reported that California prosecutors said Friday that they will seek the death penalty for Peterson again.

Peterson’s underlying conviction for the 2002 murders of his wife Laci Peterson and their unborn child still stands.

“At this point in time, we are on track to retry the (death penalty) case,” Stanislaus County Chief Deputy District Attorney Dave Harris told a judge in Modesto. A spokesperson for the Stanislaus District Attorney’s office has not yet responded to TheWrap’s request for comment.

The California Supreme Court in August overturned the 2005 death sentence but rejected Peterson’s claim that he had an unfair trial because of juror misconduct. Last week, the Supreme Court ruled that a San Mateo County judge must decide whether Peterson’s murder convictions should be tossed out.

The court’s decision came 16 years after Peterson was convicted by a jury for the first-degree murder of his pregnant wife and the second-degree murder of their unborn son following Laci Peterson’s 2002 disappearance from her home in Modesto. At the time, prosecutors said that Scott Peterson had “strangled or smothered” Laci, wrapped her in a blue tarp, drove her body out to the San Francisco Bay, attached concrete weights to her body and dumped her into the water. Following Peterson’s murder conviction, the presiding judge sentenced him to death in early 2005. The high-profile case, which was heavily covered in the media at the time, was also depicted in the 2017 A&E miniseries “The Murder of Laci Peterson.”

Last year, Gov. Gavin Newsom also placed a moratorium on the death penalty in California. The state has not executed an inmate on death row since 2006.