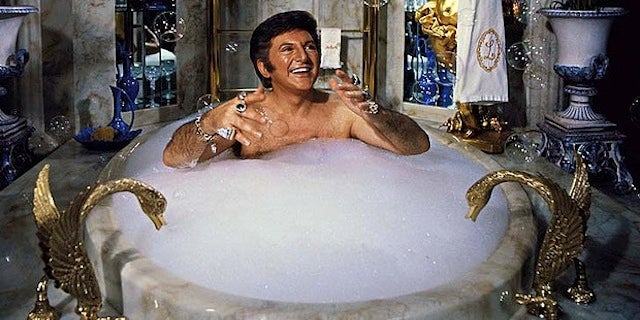 The ’50s, like the decades leading up to them, were an intensely homophobic period. Muscle cars and macho men were the order of the day. Although Lee knew that many of Hollywood’s most famous and desirable men were gay or bisexual, none of them dared reveal the truth.

Lee confessed to me that he began dating women to suppress the growing rumors about his own sexuality. If anyone dared to question his masculinity, he needed to be able to flaunt pictures of his latest girlfriend.

Also read: 'Behind the Candelabra' Review: Sex, Lies & the Closet at Cannes

He had no trouble getting all the dates he wanted and he gloried in escorting well-known entertainers to parties, getting his picture taken with Susan Hayward, Gale Storm, Rosemary Clooney, Mae West, and Judy Garland. Mae was the only one of his so-called lady friends I actually met. As they say in Texas, Mae was a hoot! She and Lee were an unpredictable twosome who enjoyed trying to outdo each other’s outrageousness. The girl he almost married didn’t compare to Mae when it came to nerve. JoAnn Del Rio, a Las Vegas dancer, had good looks and a sweet personality. Undoubtedly the entire Liberace family heaved a sigh of relief as they watched her relationship with Lee progress. For a while, it must have seemed as if Lee would finally settle down to a “normal” life and have a family.

(At left, Liberace with Mae West, his brother George and singer Johnny Ray.)

Lee and JoAnn became engaged in 1953 and even set a date for a wedding — a year away. From all reports, Lee liked JoAnn a lot, a first for him when it came to women. He courted her with gifts of flowers and perfume, gifts that foreshadowed the truly extravagant presents he would later give his male lovers.

When it came to JoAnn, the problem was not that he didn’t like her; it was that he still loved men. After Lee’s death, JoAnn’s father was reported to have claimed responsibility for ending the engagement because he knew Lee was gay. But Lee told me he never planned to walk down the aisle, with JoAnn or anyone else. His engagement served to squelch the rumors about his sexuality –period!

Many homosexual men enjoy relationships with women. There are a few who even come to love them, as friends or as temporary sexual partners. Not Lee! He had to forcibly control his dislike and distrust of most of the women he dated. He complained that all of them were too demanding, an opinion of females that he’d formed in childhood. When I asked if he’d ever had sexual relations with a woman he told me he’d had a couple of experiences, but complained that the way women smelled revolted him. While dating JoAnn publicly, he confessed that he continued to have secret dates with young men. By the end of 1955, JoAnn Del Rio was just a footnote to Liberace’s history.

(At right, Liberace with Thorson)

The older Lee got, the more younger men appealed to him. In that regard, he was a Dracula who never wearied of the taste and touch of youth. By his 50s he preferred dating boys in their teens.

There have been rumors that Lee had an affair with Rock Hudson early in their careers. But Rock wasn’t any more Lee’s type than Lee was Rock’s. The supposed affair never happened. In the years we were together, Lee never mentioned knowing Rock. Although hundreds of celebrities came to Lee’s shows, Rock never made an appearance. The two men moved in completely different circles, socially and professionally.

However, the books I’ve read about Hudson’s life reveal startling parallels to Lee’s. Both men had been abandoned by their fathers and dominated by their mothers. As adults the two of them devoted a great deal of time and energy to creating a fictional personal history for public consumption.

Neither man could deal with anything distasteful — an argument, the illness of a parent, getting rid of a lover — and both used others to do their dirty work. Lee never used male prostitutes. He was an intensely romantic man who preferred the thrill of the chase rather than the cold reality of a cash transaction. Young men eager to make a connection with a big show-business personality usually jumped at the chance for a date with him. He used his success, his fame as foreplay. If they pleased him he would keep them around for a while — a week, a month, a year or two. If not, he would send them on their way with a gift, generous to friends who granted him favors.

(At left, Liberace with Sonja Henie)

During those first years of fame, he became even more skilled at leading a double life. Onstage he smiled sweetly and flirted with his fans. In private he built an enormous and expensive collection of pornography that he shared at all-male parties. Although the family never discussed Lee’s sexual identity, they had to know he was gay. His mother may have known, too. But she undoubtedly thought there was nothing wrong with her son that the right woman couldn’t cure.

Touring abroad gave him an occasional break from his problems. He said he felt safer, more free to be himself in countries where his name was not yet a household word. In the mid-’50s he was invited to play the famed London Palladium and he jumped at the offer. To be asked to perform there signaled Lee’s arrival as a star of international magnitude. He would have other, greater thrills, but that first show at the Palladium ranked right up there with his first appearance in the Hollywood Bowl. London, he said, sounded like heaven. Before he returned to the States it was to feel more like hell.

Lee’s enthusiastic British audiences were very much like the ones he attracted in the States — mostly middle-aged, working- class housewives. He enjoyed a huge box-office success in Britain, but the critics united in attacking him. One columnist for the London Daily Press launched an all-out war, describing Lee as a “deadly, sniggering, snuggling, giggling, fruit-flavored, mincing, ice-covered heap of mother love.”

For the first time in his career Lee was publicly branded as gay, and it devastated him. He imagined himself stripped of his fame, success, wealth, and power — all the things he’d worked so hard to achieve. He burned with impotent rage for days. In Vegas, where he had connections, he’d have known exactly how to handle the situation. He’d have used his influence, his power, or his dangerous friends. But in London he felt helpless. So he struck back in the only way he could. He sued.

Lee didn’t care what the lawsuit cost in time, effort, or money. Money was surely no obstacle to the highest paid performer in the world. In the past he’d used his wealth to attract friendship and love. In England he used it as a tool to buy vindication and revenge.

Lee made up his mind to prove, for all time, that he wasn’t gay, even if it meant bringing another woman into his life. This time she would be far better known than JoAnn Del Rio.

Sonja Henie (see photo above) had been the world’s premiere figure skater in the 1920s and ’30s. She’d parlayed 10 world championships and three Olympic gold medals into an enormously successful show-business career. Blonde, blue-eyed, she had an attractive figure and, more important, a celebrity name.

Sonja was seven years older than Lee and her fame was waning when they met. I think mutual need drew them to each other. Together, they generated more publicity than either one could separately. The aging skater merited a lot of space in movie magazines and tabloids when she became the woman Liberace spent his evenings with.

Lee’s acquaintances describe Sonja as a motherly type; but Lee told me they had an affair. If he was being honest — and with Lee you could never be sure — it would be his last relationship with a woman. After the London court case came to an end, Lee never again felt the need to camouflage his true nature by dating ladies.

Lee’s lawyers had managed a miracle. They’d actually convinced a judge and jury that black was white. Lee was awarded a $22,500 settlement. He gave every penny of it to charity.

From 1959 on Lee turned to the courts whenever he failed to get his way by other means. His lawyer soon found that handling Liberace’s considerable legal affairs provided a lucrative livelihood. Given Lee’s stubbornness, his power, and his money, he usually got what he wanted by simply wearing his opponents down. When Lee and I finally confronted each other in a court of law, the bitterly contested case dragged on for five years.

In the coming years Lee’s vindication in the British courts would have one penalty. As America’s social climate became increasingly liberal, other gays came out of the closet. Lee felt compelled to keep his silence.

“I can’t admit a thing,” he said, “unless I want to be known as the world’s biggest liar.”

Adapted from "Behind the Candelabra: My Life With Liberace" (Tantor Media; May 2013) by Scott Thorson with Alex Thorleifson, now with an afterword written by Scott Thorson.

Scott Thorson, born in 1958, became famous for his relationship with and lawsuit against the late entertainer Liberace and his testimony against gangster Eddie Nash. A movie drama based on Thorson's book "Behind the Candelabra: My Life With Liberace" will air on HBO on May 26, 2013. It features Matt Damon as Thorson and Michael Douglas as Liberace. It is the first movie on the Thorson-Liberace relationship and its aftermath since the 1988 Canada-U.S. made-for-TV movie "Liberace: Behind the Music," where Thorson was portrayed by Michael Dolan. "Behind the Candelabra" is directed by Steven Soderbergh from a screenplay by Richard LaGravenese with music by Academy-Award-winning composer Marvin Hamlisch.

Scott Thorson, born in 1958, became famous for his relationship with and lawsuit against the late entertainer Liberace and his testimony against gangster Eddie Nash. A movie drama based on Thorson's book "Behind the Candelabra: My Life With Liberace" will air on HBO on May 26, 2013. It features Matt Damon as Thorson and Michael Douglas as Liberace. It is the first movie on the Thorson-Liberace relationship and its aftermath since the 1988 Canada-U.S. made-for-TV movie "Liberace: Behind the Music," where Thorson was portrayed by Michael Dolan. "Behind the Candelabra" is directed by Steven Soderbergh from a screenplay by Richard LaGravenese with music by Academy-Award-winning composer Marvin Hamlisch.