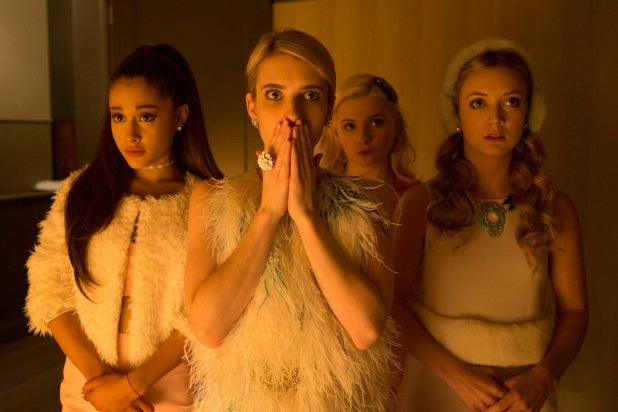 A character named Deaf Taylor Swift. A girl who didn’t realize her “freshman 15” was actually a pregnancy. Ariana Grande text messaging her killer to “stop, please stop” as he plunges a knife into her. If you’re tuning into “Scream Queens” – the latest horror offering from Ryan Murphy – with expectations of a network version of “American Horror Story,” you’re about to be disappointed.

“Scream Queens” is to sorority movies what “Wet Hot American Summer” is to summer-camp flicks. At the core of the miniseries is the mystery of who is underneath the Devil mask killing all of these girls in the KKT sorority. But on the surface there is plenty of ridiculousness to go around. In fact during several key scenes, you’re almost expecting a laugh track to suddenly go off, confirming your own take on the sheer absurdity of what’s happening in front of you.
And that’s exactly the point.

Emma Roberts helms it all as the sorority’s Queen Bee, Chanel. Her “minions” are accordingly appointed their own versions of the moniker; there’s Chanel #2 (Grande), Chanel #3 (Billie Lourd) and Chanel #5 (Abigail Breslin). We’re told that at one point there was a Chanel #4, but she came down with mono. Chanel didn’t want her to go home, so when she went anyhow, Chanel #4 became dead to her.

Everything runs as smoothly as a white-girl pumpkin spice latte with two shots, no foam, served at 212-degree until pledge week begins. That’s when new dean Cathy Munsch (appropriately played by original Scream Queen herself Jamie Lee Curtis), and former sorority sister Gigi Caldwell (Nasim Pedrad), decide that this year, all girls who pledge KKT must be accepted. This includes sociopath Hester Ulrich (Lea Michele) and good girl Grace Gardner (Skyler Samuels), among others. As Grace begins to investigate the sorority and return it to the “good old days” when her now-dead mother was a sister having the time of her life, more and more gruesome murders begin to take place.
The entire two-hour pilot is parody, on top of parody, on top of parody. The sentences coming out of Chanel’s mouth are beyond anything a clichéd mean girl would utter in other high school or sorority movies, while every homage to films like Scream or Urban Legends is taken to the extreme.

What makes it work is Murphy’s renowned world-building. Everything from the cinematography to the makeup and the script’s tone works in conjunction to deliver a situation in which the audience can plausibly believe these characters are in peril, but also where it’s OK to laugh at their sheer ignorance about the actual real world.

As far as television series go, it’s a fresh idea that seems to have a limited shelf life given its unique tone; much like HBO’s political satire “The Brink,” audiences may not know what they’re getting themselves into simply because the pilots are so hyper and different. With offerings like “Scary Movie” — one of the original horror parodies to see box office success — the characters didn’t take themselves seriously, which meant the audience didn’t take it all that seriously either. It’s the opposite here, but just because Chanel, Dean Munsch and Grace believe in their worlds, that doesn’t mean the audience should.

Instead, all Murphy and co. are asking from viewers is that they just sit back and bloody well enjoy the ride while it lasts. Because given the number of deaths in the pilot alone, it’s pretty clear not everyone is making it until the end anyhow.