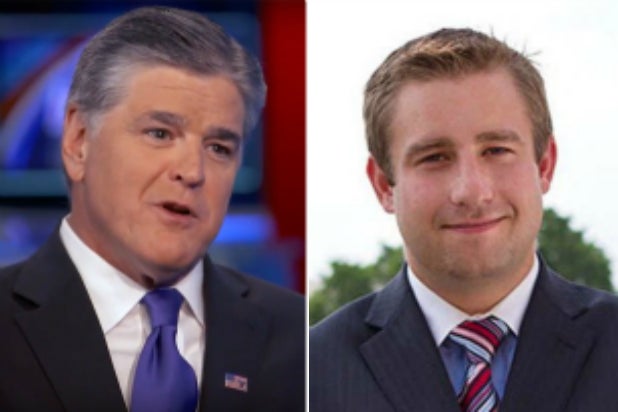 Update: Sean Hannity continued Tuesday to push the Seth Rich conspiracy theory even after Fox News retracted their earlier story. And on Twitter just a few hours before the May 23 episode of his Fox News Channel show, Hannity promised a “huge announcement” about the debunked story, and implied that his future at the cable news giant might be in flux.

Huge announcement tonight about Seth Rich, Trump/Russian Collusion corrupt media, the liberal effort to silence me. And my future at Fox!

During Tuesday’s edition of Hannity’s radio program, the host declared that he feels “so badly” for Rich’s family, but nonetheless said he felt a “moral obligation” to pursue what he apparently believes is the truth, Mediaite reports.

“The family’s actually on the internet saying they want to find the truth. I feel so badly for this family, and what they have been through, and what they are going through. And my thoughts and prayers are with them,” Hannity began.

The host’s comments, however, appear to directly oppose what Rich’s family has expressed in a previous statement, blasting “unsubstantiated” conspiracy theories.

Hannity then offered, “This issue is so big now that the entire Russia collusion narrative is hanging by a thread. If in fact, take Seth out of it, there was a whistleblower within the DNC, a truth teller that actually was the source for WikiLeaks and not Russia working with the Trump campaign, these are questions that I have a moral obligation to ask.”

Earlier Tuesday, Fox retracted a story it had published earlier this month about Rich’s 2016 murder, saying that the story “was not initially subjected to the high degree of editorial scrutiny we require for all our reporting.”

“On May 16, a story was posted on the Fox News website on the investigation into the 2016 murder of DNC Staffer Seth Rich. The article was not initially subjected to the high degree of editorial scrutiny we require for all our reporting,” the network said in a statement released Tuesday.  “Upon appropriate review, the article was found not to meet those standards and has since been removed. We will continue to investigate this story and will provide updates as warranted.”

Fox News was one of many right-leaning media outlets that floated unsubstantiated theories that Rich provided WikiLeaks internal DNC emails, and that he may have been killed in retribution. Rich was shot to death last July in Washington, D.C., in what police have investigated as a robbery gone wrong.

Rich’s family publicly criticized Fox News and other outlets for promoting unfounded versions of the story.

“It’s sad but unsurprising that a group of media outlets who have repeatedly lied to the American people would try and manipulate the legacy of a murder victim in order to forward their own political agenda,” a spokesman for the Rich family told Business Insider. “I think there is a special place in hell for people like that.”