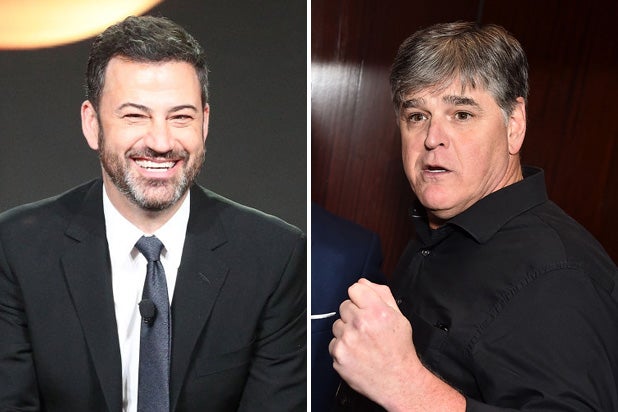 Sean Hannity escalated his war of words with Jimmy Kimmel Thursday evening, tweeting a video from Kimmel’s tenure on “The Man Show” when the comedian asks various women to touch his crotch and calling the ABC host “Harvey Weinstein Jr.”

One of the women on tape, whose date was not immediately clear, said she was 18. Kimmel co-hosted the Comedy Central show from 1999 to 2003.

“This is ABC’s @jimmykimmel aka Harvey Weinstein Jr. Asking 18 year old girls to grab his crotch and “put their mouth on it”. Jimmy that’s you being a pervert a–hole. How would you feel if that was your daughter? I bet @Disney is so proud,” said Hannity. “So @jimmykimmel (aka Harvey Weinstein jr) I’ll have much more tomorrow…… @Disney Tick Tock.. Best Sean #pervertkimmel”

This is ABC’s @jimmykimmel aka Harvey Weinstein Jr. Asking 18 year old girls to grab his crotch and “put their mouth on it”. Jimmy that’s you being a pervert asshole. How would you feel if that was your daughter? I bet @Disney is so proud. https://t.co/o7ydG72Pzc

While “The Man Show” was always kind of cringe-worthy in hindsight, its segments are particularly at odds today amid the broader MeToo movement and with Kimmel’s new persona hosting “Jimmy Kimmel Live!” on ABC.

Hannity’s response came after Kimmel used his Thursday night show to lace into the Fox News host for calling him an “a–clown” earlier in the week.

“This is the guy who defended the multiply-alleged pedophile Roy Moore,” Kimmel said. “And I’m a despicable disgrace. I’m the a- clown. Here’s the thing. If I’m an a- clown, and I might very well be, you, Sean, are the whole a- circus. You’re the juggler, you’re the trapeze artist, you are the a- lion tamer and the a- human cannonball all jammed into one little car. You are the Ringling Brothers and Barnum and Bailey of A- Clownsmanship.”

For his part, Kimmel responded by mocking any big reveal Hannity had in store for him.

The origin of the feud was a Kimmel segment joking about Melania Trump reading to children at the annual White House Easter Egg roll. In his monologue Monday — yes this goes back to Monday — Kimmel mocked the first lady’s accent.

“About dees and dat. Guillermo, you realize what this means?” Kimmel said to sidekick Guillermo Rodriguez. “You could be first lady of the United States.”

Also Read: Jimmy Kimmel Skeptical Melania Helped With Trump Easter Party: 'The Only Thing She's Been Working on Is an Escape Tunnel' (Video)

In addition to Hannity, the moment was offensive enough for Kimmel to receive a scolding on “Fox & Friends” this week as well.

Reps for Kimmel did not immediately respond to TheWrap’s request for additional comment.