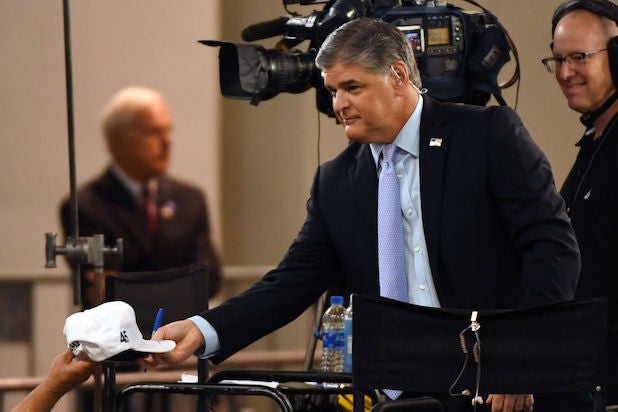 Sean Hannity has threatened to sue The New York Times and some of its columnists unless the paper retracts and apologizes for pieces that his lawyers claim mischaracterized Hannity’s coverage of the coronavirus pandemic.

In a statement provided to TheWrap, a New York Times spokesperson rejected the demand: “We’ve reported fairly and accurately on Mr. Hannity and there is no basis for a retraction or an apology.”

In a letter sent to the Times on Monday, Hannity’s attorney, Charles Harder — who has also represented the Trump campaign in its various lawsuits against media outlets — wrote that three different columns published on March 22, March 31 and April 18 by Ben Smith, Kara Swisher and Ginia Bellafante, respectively, were “false and defamatory, and extremely damaging.”

Regarding Smith’s March 22 column, “Rupert Murdoch Put His Son in Charge of Fox. It Was a Dangerous Mistake,” the letter claims that Smith “falsely stated and falsely implied that Mr. Hannity downplayed the seriousness of the coronavirus pandemic.”

As for Swisher’s March 31 op-ed, “Fox’s Fake News Contagion,” the letter states that Swisher “falsely” stated and implied that Hannity is “responsible for determining all of Fox News’ coverage of the coronavirus, regardless of program or host” and that he has “downplayed the seriousness of the coronavirus pandemic and given the public ‘misinformation” about the pandemic.'”

And for the April 18 piece by Bellafante about Joyce, “A Beloved Bar Owner Was Skeptical About the Virus. Then He Took a Cruise.,” the letter says that the piece “falsely” states and implies a connection between Hannity’s on-air comments and Joyce’s decision to go on a cruise.

“What you fail to mention is that Mr. Hannity’s comments could not possibly have influenced Mr. Joyce’s decision because he embarked on his cruise on March 1 (according to your report), while Mr. Hannity made comments on March 9, which you claim influenced his decision. Moreover, you were fully aware that this was the actual timeline, and in order to mislead your readers and support your false narrative, you withheld the date of Mr. Hannity’s comments from your story,” the letter claims.

If the Times does not “retract, correct and apologize” for the aforementioned columns, the letter says that Hannity will be left with “no alternative but to consider instituting immediate legal proceedings.”

The New York Times isn’t the only organization that has been critical of Hannity’s coronavirus coverage. For instance, recent study from the University of Chicago’s Becker Friedman Institute for Economics found that in counties where “Hannity” viewers outnumbered “Tucker Carlson Tonight” viewers, there were a higher number of COVID-19 deaths in the early stages of the pandemic.

The study concluded that “Carlson warned viewers about the threat posed by the coronavirus from early February, while Hannity originally dismissed the risks associated with the virus before gradually adjusting his position starting late February.”

In response to the study, a Fox News spokesperson said that the clips from Hannity’s coverage were “cherry-picked” and that the study was “reckless and irresponsible.”