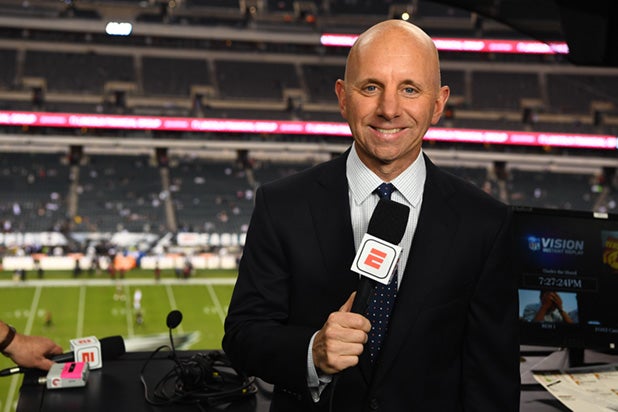 ESPN’s Sean McDonough has signed a multi-year extension to his deal that will see him leave his current role as the voice of “Monday Night Football,” the network announced on Friday.

McDonough is leaving the booth after just two years, having replaced Mike Tirico in 2016. He will rejoin ESPN’s college football team to call weekly games, as well as a College Football Playoff Semifinal.

No replacement has been formally announced, but the New York Post’s Andrew Marchand tweeted shortly after news broke that the network plans to name Joe Tessitore as McDonough’s replacement.

“Sean is so well-respected at ESPN and throughout our industry and we look forward to his return to college football where he will be a signature voice on many of our biggest games, including the College Football Playoff,” said Stephanie Druley, ESPN Senior Vice President, Events and Studio Production. “Sean is a highly-skilled broadcaster who brings great passion, energy and work ethic to every game he calls. In addition to his premier play-by-play skills, Sean excels at storytelling and setting the scene for the emotion and pageantry of college football, which are such integral parts of our presentation.”

“Over the past two years, as I watched college football on television, I realized how much I missed it,” said McDonough. “Being the ‘Voice of Monday Night Football’ was one of the great honors of my life, but I am grateful for the opportunity to return to the unique traditions, rivalries and pageantry of college football and to tell the stories of the participants. I look forward to reuniting with ESPN’s college football team where I have so many close friends in front of and behind the camera.”

“Sean is a Hall of Fame broadcaster and person,” added “MNF” producer Jay Rothman. “On behalf of our entire MNF family, I thank him for his outstanding work the past two seasons and wish him well as he returns to college football.”