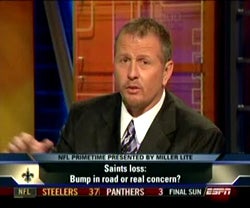 Sean Salisbury — the former NFL quarterback, ESPN football analyst and radio host — has finally admitted what the sports blogosphere already knew – and "Worldwide Leader in Sports" had tried to keep quiet: that he once took cellphone photos of his penis and showed them to colleagues.

“I was ashamed, and I didn’t want to say anything," Salisbury told the USA Today. "I thought it would go away and let my ego get in the way. Since then, I’ve beat myself up about it more than 10 baseball bats could. A stupid mistake can cost you, and this has really cost me. I should have been having this conversation a long time ago."

The incident occurred while Salisbury was employed by ESPN, which suspended him for a week and ultimately did not renew his contract. Last September, Salisbury was dropped by a Dallas sports radio station for what he claims were "disagreements over my contract and show content."

The former Viking also said he has since submitted to “anger management therapy.”

All of this would seem to put a little dent into Salisbury’s ongoing lawsuit against Deadspin.com, the Gawker Media sports blog (full disclosure: I cover tennis for them) owned by Nick Denton, after the site posted a bizarre e-mail exchange with him.

But Salisbury told the paper he is going ahead with it anyway.

One thing he’s not going ahead with: the "tell-all" book about ESPN he claimed he was writing.

"I’m not a tell-all guy and regret saying that.”