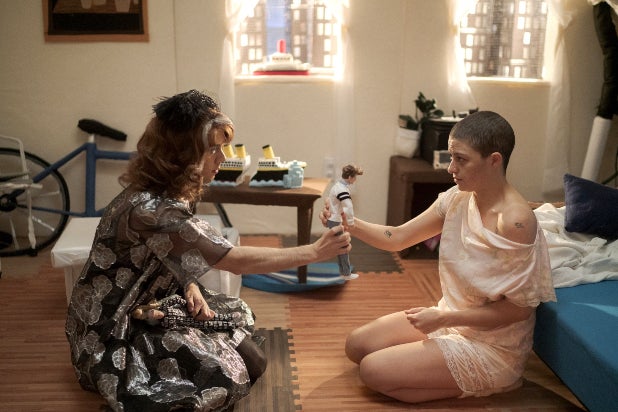 The dolls were made by artist Cyrus Bronock, who was enlisted by HBO to design miniature likenesses of the “Search Party” trio and has made many others, including several of Barbara Streisand and a figurine of Sarah Michelle Gellar in “Buffy the Vampire Slayer.”

The creepy likenesses of Drew Gardner (John Reynolds), Portia Davenport (Meredith Hangar) and Elliot (John Early) are supposed to be created by Dory’s captor Chip (Cole Escola), a deranged twink who is keeping her locked in the basement of his aunt’s house. There’s also a model of Dory, as well as the dead Keith (Ron Livingston) and April (Phoebe Tyers).

Bronock told Slate that he’s also made several Mariah Carey dolls and that the pop star “owns a few of them.”

The dolls are all detailed replicas of the characters and their outfits are from the first and second seasons of “Search Party.” Some even come with accessories — Drew’s doll is holding a scaled-down version of the obelisk he used to bash Keith’s head in, while the Portia doll is wearing a gigantic (fake) gold cross.

“For Portia’s necklace, I bought a little bag full of various crosses, knowing that at least one would have to work,” Bronock said of his process. “For the obelisk, I sculpted the top part and the bottom part is a little, tiny tester spool of thread, without the thread on it.”

The details in the dolls did not come quickly for Bronock. He said the creations “usually take about three to five full days of work,” and added, “I hand-sew about 95% of the clothes.”

You can find more of Bronock’s doll creations on his Instagram page.

The “Search Party” actors also got to meet their doll selves. John Reynolds said in a recent video that while he appreciated Drew’s “wise hands” and “taut ass,” he thought the doll was scary and added, “I would absolutely not put this doll on display in my house.”

John Early met his doll version of Elliot and was impressed by the level of detail. His Elliot doll is dressed in the iconic “no no no” outfit Elliot wears in season 2 while he’s supposed to be incognito, snooping around a department store with Portia.

Early said he was impressed with Bronock’s attention to detail and said he thought the doll “totally nailed Elliot’s spirit.”

“There’s one eyebrow kind of cocked, it’s giving this air of like, don’t talk to me,” Early said.”It’s bringing up a lot of things for me … Mostly just kind of confirming that I look like a late-career Jeff Daniels,” he joked.

Also Read: Is There a New Episode of Bill Maher's 'Real Time' Airing This Week?

Bronock said the Elliot doll was the most difficult for him to finish. “I love John Early — he’s hilarious, and such an amazing actor. But it feels like every time I look at a picture of him, he looks like a different person,” Bronock said. “Usually the more gentle a person’s facial features are, the more difficult it is to capture their likeness. With a couple of the dolls, I had to do three or four different sculpts before I got the right one.”

In the show, after she meets the dolls, Dory instantly loves her new freaky friends, which annoys Chip — he’s trying to make her believe that her friends committed the murders she landed on trial for in Season 3 and is using the dolls as a weird immersion “therapy” technique. Later, in an extremely uncanny valley move, Chip builds a model of the crime scene where Dory and Drew killed Keith and makes her re-enact the events the night of the murder with the dolls, who later morph into their humanoid selves as she plays out the scene.

“Search Party” is coming to HBO Max in installments. The first six episodes are available now, and the final four will be released Jan. 28 at midnight PT/ 3 a.m. ET.