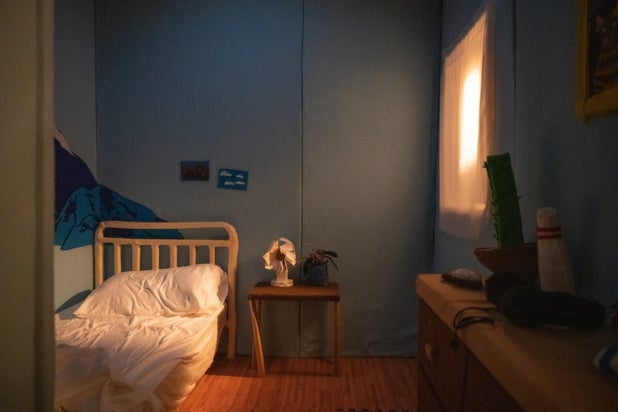 The final four episodes of “Search Party” are live tonight on HBO Max, and the conclusion to the saga of Dory Sief (Alia Shawkat) and her captor comes to a jarring end.

The third season of “Search Party” left viewers with a cliffhanger, as Dory was shown chained up in a chair, filming a hostage video from a cement cell. The atmosphere was definitely grim, but the “Search Party” creators Sarah-Violet Bliss and Charles Rogers said they didn’t intend to have Dory waste away in a literal prison for the entire fourth season. Instead, Dory was kept captive in a basement bunker that her warden Chip (Cole Escola) designed to look like a perfect replica of her New York apartment — but made entirely of felt.

“We’ve always tried to put the ‘Search Party’ spin on any idea that felt too familiar,” Bliss and Rogers told Bustle, adding that they wanted to have Dory stuck in some twisted version of her apartment from the beginning of the show. “In that same regard, we knew we wanted Dory’s torture chamber to be colorfully elevated.”

The eerie replica of Dory and Drew Gardner (John Reynolds)’s apartment wasn’t just an aesthetic choice, though. The “Search Party” co-creators said that they tried to think through how Chip would want to keep Dory as subdued as possible — after all, she is a double-murderer.

“The only problem with [putting Dory in a real apartment] is that she would have access to so many sharp tools and items that could facilitate her escape,” Bliss and Rogers said. “We needed to make sure she had nothing helpful at her disposal, and knowing that Chip had a penchant for doll making, it made sense that he’d be a felt expert, as well.”

The felt home was really created by “Search Party” production designer Danica Pantic, set decorator Casey Adams and art director Cara Alpert. The trio had to do multiple versions of the apartment, and some of the larger pieces ended up being discarded.

“A lot of big felt furniture and pieces that had started to pile up in our offices weren’t going to fit in Dory’s felt chamber, and they just kind of became the set dressing for the Search Party office space. It was like we were living in Dory’s felt apartment, as well,” Rogers said.

Chip re-creates every detail in the apartment, including fake foam shower suds and felt pills in the medicine cabinet. Once his Aunt Lylah (played by none other than Susan Sarandon) finds Dory’s prison, the full extent of his efforts is on display through the lens of someone outside the creepy house.

“Ultimately, Aunt Lylah has a line upon discovering the felt apartment that Chip could have been a very talented artist. And that is true,” Rogers and Bliss said. “Chip is undoubtedly some kind of genius on some level for having the will to construct so much insanity and push another person through it like a spiritual haunted house.”