Blink and you’ll miss it — “Search Party” co-creator and writer Sarah-Violet Bliss’ Instagram page made a quick cameo in the third episode of season 4.

“Search Party” returns to HBO Max this week for its fourth season, picking up after last year’s cliffhanger episode, which showed leading lady Dory Sief (Alia Shawkat) kidnapped by an obsessed fan named Chip (Cole Escola) who stalked her for most of season 3. Dory becomes imprisoned in a prison Chip’s created in his aunt’s basement, and season four feels more like an episodic Stephen King-inspired horror film than a comedy as she tries to find ways to escape her captor’s clutches.

In episode 3 of the new season of “Search Party,” recently acquitted (but totally guilty) murderer Drew Gardner is working, of all places, at a kid’s theme park called Merry Merry Land as a mascot. In between attempts at courting another employee who’s dressed as a princess, Drew does what everyone in service jobs does during down time: looks through his phone. 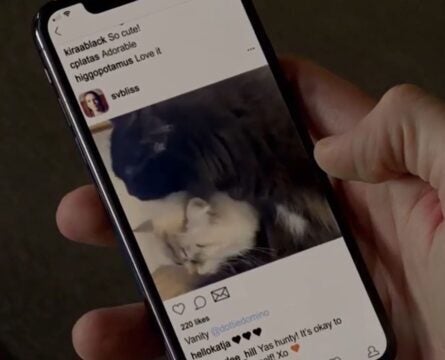 While Drew’s scrolling through photos on Instagram, he stops for a second on a profile with the handle @svbliss. The photo is a picture of a black and white cat snuggling, with the caption “Vanity @dottiedomino.”

Now, if you go to the @svbliss page on Instagram, you’re not gonna find anything because Bliss’s page isn’t active these days. But it is her handle, and so is the one that was tagged there in the post we saw on “Search Party,” @dottiedomino.

The latter account will likely be relevant to everyone’s interests — it’s just a bunch of pictures of Bliss’s cats, which is the sort of content that most of us can all get behind.

Bliss’ manager said Bliss wasn’t aware that her handle would be used in the episode, but did request that her cats be featured at some point in this season of “Search Party.”

“The cats are my cute cats Dottie and Domino. I may have demanded that they make an appearance as the most exquisite beings to walk this earth deserve some screen time,” Bliss told TheWrap.

Amusingly, Bliss didn’t learn about all the particulars of this semi-cameo until we reach out to ask about it.

“Search Party” is coming to HBO Max in installments. The first three episodes are available now, and another three episodes will be released Jan. 21 at midnight PT/ 3 a.m. ET, followed by the final four on Jan. 28.
x