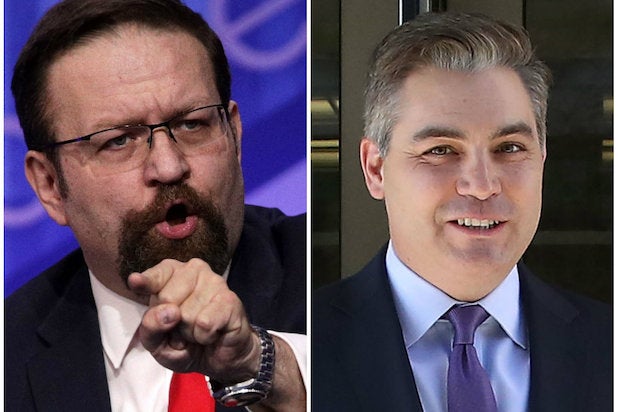 According to Gorka, who is now a Fox News contributor and Salem Radio host, the argument erupted after Acosta questioned why he was there.

“So, I’m minding my own business right at the entrance of the White House briefing room on the inside,” Gorka told radio host Mark Levin. “And suddenly the door opens and in prances Jim Acosta… He grabs me by the arm, and says ‘You shouldn’t be here, this place is for real journalists.'”

Also Read: Kellyanne Conway Calls Jim Acosta a 'Smartass' Looking for a 'Viral' Moment; He Gets One

“Then loudly in front of everybody, because I guess that’s my style, I said, Jim, that’s why you are a…,” Gorka explained stopping short of saying the word itself. The Daily Caller reports however that Gorka told them he said “you are a d—head!”

Gorka continued, telling Levin that Acosta then “hid” in the back for the 40 minutes, in an effort to avoid him.

“This guys seems to think the White House Briefing Room is the Jim Acosta show,” Gorka went on, calling Acosta by his legal name “Abilio.”

Acosta, who is Cuban American, goes by his middle name, James.

After another reporter noted that Gorka insists on calling Acosta by his Hispanic name, Acosta responded on Twitter: “Hola… I’m proud of my Cuban heritage and the name Abilio! My dad is an Abilio. So was my grandfather. My middle name is James. Which is where I get Jim. Friends called me Jimmy growing up. It just stuck until I started going by Jim in college. Though college buddies liked Abilio!”

CNN did not immediately respond to a request for comment Friday.

Gorka, a former advisor to President Trump, was ousted from his position in August 2017, as part of a purge by then-incoming White House Chief of staff, John Kelly.

You can listen to Gorka’s interview with Levin below.

Hola..I'm proud of my Cuban heritage and the name Abilio! My dad is an Abilio. So was my grandfather. My middle name is James. Which is where I get Jim. Friends called me Jimmy growing up. It just stuck until I started going by Jim in college. Though college buddies liked Abilio! https://t.co/416ZhlZkR4