Michael Jackson has no wooden sleds revealing the secrets of his childhood, but rummaging through the warehouse where Julien‘s auction house was photographing and cataloguing the one-time King of Pop’s Jackson;s possessions from the Neverland estate was nevertheless a revealing window to his way of seeing the world.

A few weeks ago, I was given exclusive access to the collection, ahead of the — now litigated — monster sale being planned in Beverly Hills in April. I could tell nobody at the time that I was doing it, and the location of the Los Angeles warehouse is a secret I have sworn to keep forever. 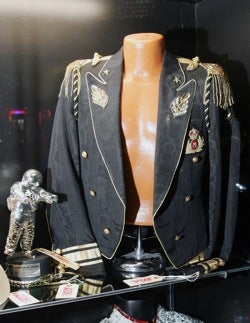 The day I arrived, the ninth of 10 semi trailers had just brought in another vast haul.

Easily the most arresting item was the right-hand half of the dismantled wrought-iron gates to Neverland, leaning against a wall like an outsize bed frame. (The left-hand half had come in on an earlier consignment.) Sitting outside the warehouse was Jackson’s Popemobile-like electric car collection — a weirdly stunted collection of baby open-top limos that looked and felt more like toys than real vehicles.

The rest spoke, above all, to Jackson’s mania for accumulation — be it antique furniture, or porcelain, or memorabilia from children’s TV shows. Jackson has a well-earned reputation as an inveterate shopper, and absolutely nothing I saw was a generic off-the-shelf item.

Some things betrayed a perfectly grown up good taste — a beautiful wooden double-desk wide enough to contain drawers on either side, for example, or a perfectly carved cabinet that looked, to this inexpert eye, like a product of the 19th-century Biedermeier movement. 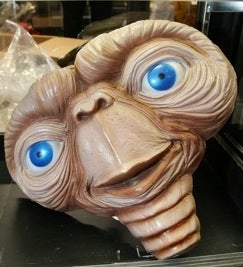 Most things, though, were considerably more eccentric. Jackson clearly had a thing for Lladro porcelain — around 300 pieces, including a big, gaudy, plug-ugly table-top montage depicting Cinderella’s arrival at Prince Charming  ‘s ball for which Jackson originally paid a stunning $30,000.

He also has a gold-leaf galley, which looks like a Viking ship but is in fact a gift from Thailand’s Commerce Minister. From the U.S. Treasury, he has a sheet of dollar bills he has had mounted and framed. An  extraordinary collection of life-size three-dimensional figures ranges from Marilyn Monroe to Elvis by way of the  Three Stooges. As a monument to his own success, he has countless bronze figurines of himself dancing, singing, wearing hats and his trademark stage costumes. 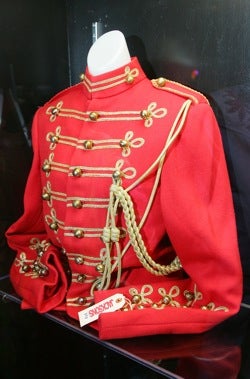 And then there is the child motif, which runs through Neverland like some huge, unavoidable Freudian subtext.  Jackson seems to have acquired dozens of sculptures of boys and children playing idly in one pose or another. Some of the figures are mounted on rocky promontories or other pieces of natural landscape. Others, like his collection of Roman Parmenter figures, depict just the children themselves, reduced to about 45 cm in height.

Everyday life at Neverland was clearly shot through with childhood references. The Anytime Menu posted for his guests reads like a fantasy wish-list for a kid visiting Disneyland — ranch burgers, sandwiches and fingers foods — and is accompanied by the words to a poem or song beginning with the words: Children of the world, we’ll do it.

Is Jackson now suffering from seller’s remorse? Darren Julien told me during my tour: "I’m sure he has mixed feelings." But he also said: "Emotionally, he has let go." He may have spoken just  a touch too soon.