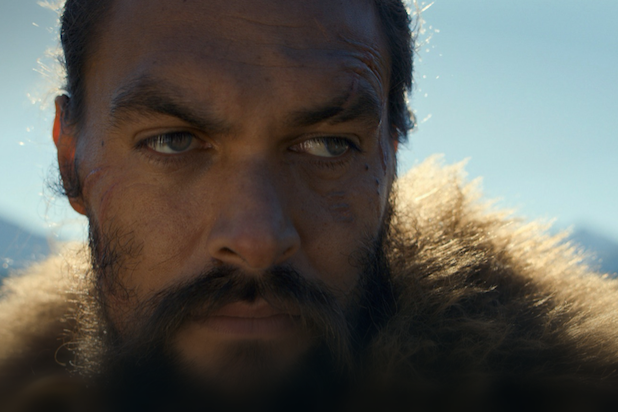 Apple TV+ launches Friday with a small selection of all-original content for subscribers to choose from, one of them being the sci-fi series “See.” What’s special enough about the series, starring Jason Momoa and Alfre Woodard, to warrant its placement among the first batch of heavily curated shows Apple is offering customers on its new streaming service? For starters, it’s set in a world where no one can see. Well, almost no one.

“See” takes place in the distant future, hundreds of years after a deadly virus has decimated humankind and left those who survived blind. Momoa plays Baba Voss, the leader of a powerful tribe and father of twins born into this post-apocalyptic world with the mythic ability to see, who must be protected from a queen who wants to destroy them.

Carrying out that plot in the most authentic way possible required a lot of strategic planning, according to director and executive producer Francis Lawrence.

“There are certain guiding principles with the world creation of the show,” Lawrence told TheWrap. “One is that the bulk of civilization disappeared hundreds of years ago, so you have this idea that nature has reclaimed the Earth. The other guiding principle is the fact that everybody who has evolved and is still alive during the timeline of our show is blind. And that sort of dictated, more so even than the nature, that kind of dictated every choice that we made, right? It sent performances in a certain direction, it made prop choice very specific, the costumes were designed specifically because of it, all of the sets were designed because people who can’t see are building huts, so do you need windows? Things like that. Everything was sort of guided by that principle.”

“Now in terms of performance, what we knew we were gonna have to do is create a boot camp for everybody, for every actor that came in,” Lawrence said. “So whether they were a principal, a regular, a day-player, all the background extras, everybody had to go through training. And we had a blindness consultant, this guy Joe Strechay, who is fantastic, who could sort of help train and give a sense of experience, right?”

“So people would wear sleep shades and they would walk around and he would teach them how to do some sorts of navigation using sounds, using smells, sense of temperature, helping them sort of tap into different senses,” he continued. “It was a bit like learning a new language. And over the course of about 4 to 5 weeks, through training, people built up a tool set that they could then bring to set. And all the actors did it, and most of the sort of key crew members also went through some part of the training, just to get their minds kind of wrapped around it. But the idea is it’s never gonna be real, right? Because we can only imagine and we can only create this kind of a world. But we do the best we can to make it at least feel as authentic as possible.”

Now you might be wondering why the Apple TV+ epic didn’t cast blind actors as the show’s leads, instead of Momoa and Woodard, and their co-stars Yadira Guevara-Prip, Sylvia Hoeks, Nesta Cooper, Archie Madekwe, Christian Camargo, Hera Hilmar and Marilee Talkington. Well, “See” does feature cast and crew who are blind or have low vision. But Lawrence thinks they can “do better” with their casting choices, if the show is renewed for Season 2.

“Every episode has some blind actors or some low-vision actors,” Lawrence said. “We definitely made an effort to be as inclusive as possible. And I will say that this season is a start, I still think we can do better. And I think we’re going to try and do much better, if we get that second season, to include more blind people — specifically with the more visible characters and principals and series regulars.”

“There’s no way we could have done a show like this without being as inclusive as possible and I still think there’s a lot of room to grow and to better.”

The first three episodes of “See” will premiere with the launch of Apple TV+ on Friday.