The latest issue of Adbusters magazine hit newsstands and mailboxes Tuesday — and it’s safe to say Donald Trump ain’t gonna like its barcode placement one bit.

The bi-monthly magazine, published by the 27-year-old Vancouver-based nonprofit group behind the Occupy Wall Street protests, features a black and white picture of the GOP nominee on its cover. 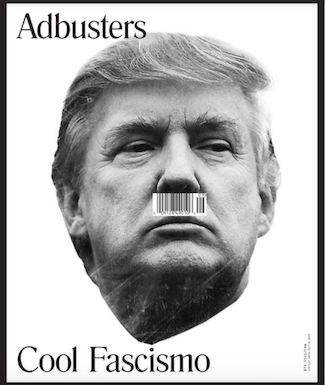 So far so good … except for where the graphic designers placed the publication’s Universal Product Code: right above the candidate’s upper lip to give him a decidedly Hitler-esque look.

“Adbusters Issue #127 takes on the rise of global fascism, exposing the symptoms of a sick and outdated system,” the magazine’s editorial page explained.

“Everywhere you look, fascist tendencies are creeping into view as each day our world falls further and further into chaos. Have we forgotten the lessons of the past? Will we bury our heads into the comforts of virtual reality while egomaniacs capture the imagination of the masses? Cool Fascismo is an unprecedented exploration into a world where a culture of cool becomes a culture of fear.”

Trump’s campaign did not respond to TheWrap’s request for comment.