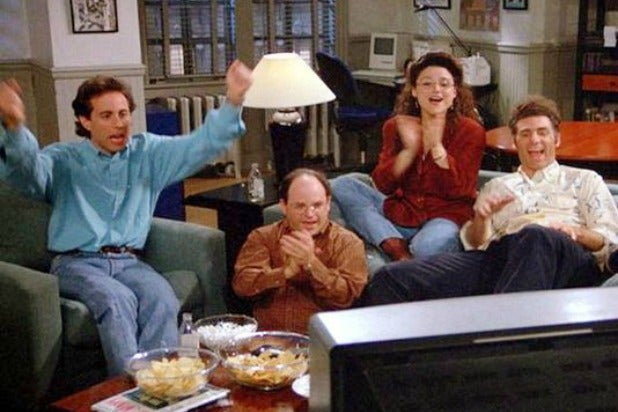 For a show about nothing, “Seinfeld” sure covered a lot of ground. But even after 173 episodes, there was more water in that well.

We’ve posted our three favorites below, click over to Entertainment Weekly via the above link for more.

Friggin’ “Cybill”
We went very far down the road with an idea that Frank was going to need medical marijuana for his cataracts. We thought the idea of Jerry Stiller on pot just seemed like comedy gold. We heard that “Cybill” writers had a similar story in the works, and it was enough to make us put the idea aside. We were really rigorous about not wanting to repeat things. I don’t think it was fully outlined, but that was a story that was ready to go. That would happen a lot.
– Mandel

We All Know a “Prompter”
Alec [Berg, a “Seinfeld” writer-producer] and I pitched this idea a few times. There was another comic, and she was a prompter. Jerry [Jerry Seinfeld] would be at lunch with her, and she would say, “You know, I only had one bit that really killed.” Then she would wait, and he’d have to go, “Which one?” “The bowling thing. It only died one time, but that’s because of who was there.” “[Sigh] Who?” You’d wait her out and she’d wait you out. Everyone knows someone like that, who just makes you pull it out of them. In “The Secret Code,” Jerry was going to do an ad for an appliance store called Leapin’ Larry’s, and she was saying, “If you’re going to meet with Leapin’ Larry, there’s one thing you should really know about him.” It was the fact that he had a prosthetic leg. And Jerry just ignored it. Then when Jerry wound up insulting him, he said, “Why didn’t you tell me???” “Well, you didn’t take the prompt. I tried.” It seems like the easiest device in the world: You ignore the prompter, and he or she actually has good information for you. That could work in any show, but we never used it.
– Schaffer

“Seinfeld” Heads for the Border
There was one story that we never got to for any particular reason, but I always loved it. Had there been another season, I certainly would have tried to write this, because it was near and dear to my heart. The idea was that Jerry and the gang go on a vacation somewhere — say, Mexico — and they would check into their hotel rooms, and Jerry would end up with a hotel room right across from Kramer’s hotel room, so the hotel-room dynamic would have been the same as the apartments. The entire episode would have taken place in Mexico but everything would have been kind of the same — there would have been a Mexican diner that they sat in. I just thought the idea of taking the building blocks of “Seinfeld” — the apartments across the hall and the coffee shop — and transporting that to Mexico would be really fun. When Jerry decided to end the show, and I realized there weren’t going to be enough episodes, I was like, “Oh God, I wish there was one more season.”
- Mandel