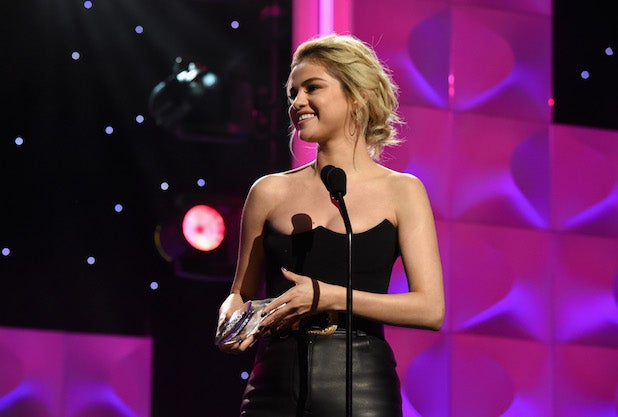 HOLLYWOOD, CA - NOVEMBER 30: Honoree Selena Gomez Accepts the Woman of the Year Award onstage at Billboard Women In Music 2017 at The Ray Dolby Ballroom at Hollywood & Highland Center on November 30, 2017 in Hollywood, California. (Photo by Michael Kovac/Getty Images for Billboard)

Selena Gomez is opening up about working with Woody Allen in the midst of the sexual misconduct accusations swirling in Hollywood, and said it was something she had to “face and discuss.”

“To be honest, I’m not sure how to answer,” Gomez said in a recent Billboard interview when asked if she considered Allen’s past before auditioning for his upcoming movie, “A Rainy Day in New York.”

“Not because I’m trying to back away from it,” she said. “[The Harvey Weinstein allegations] actually happened right after I had started [on the movie]. They popped up in the midst of it. And that’s something, yes, I had to face and discuss. I stepped back and thought, ‘Wow, the universe works in interesting ways.'”

Gomez, 25, said that she is “hopeful” now that predatory men are being held accountable, and that while she is “fortunate” enough to not have experienced certain traumas being exposed by others, she does know family “who’ve gone through those things.”

“As people speak out, I hope that feels powerful to them, because they deserve to feel that,” she added.

Allen was accused of sexually abusing his adopted daughter Dylan Farrow in 1992.

Gomez said she auditioned five times for her role in the film, which also stars Timothée Chalamet, Jude Law and Kelly Rohrbach.

“I didn’t have the greatest confidence a few times and they passed on me, but it turned out that they didn’t find anyone, so I auditioned one more time and gave it my all,” she said. “I do feel like I earned it.”

She said it was a “great experience for me” and that the film “really opened me up,” which she “needed that after the surgery.” She said the film is a “step in the direction I want to go in [with acting]. I’ve begun spending time with [independent filmmakers] the Safdie brothers, too, who are incredible.”

You can read the full feature on Gomez here.