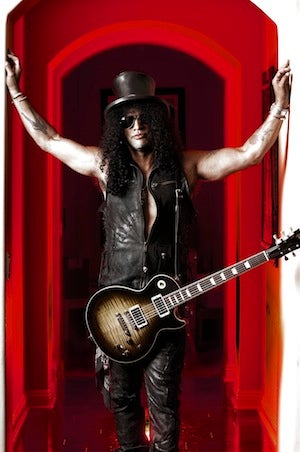 In a music industry besieged by CD sales in double-digit freefall, cutbacks, single-song iTunes downloads, layoffs, piracy and illegal downloading, being a rock star in 2010 just isn’t what it used to be — even if you’re superstar guitarist Slash and you’ve got a new solo record coming out Tuesday.

“I’m very rock ‘n’ roll, and I believe in being cool about everything,” Slash told TheWrap, “but at the same time if you’re going to make a record and if you want anyone to hear it, you have to get out there and let them know about it, and today that’s all about getting online and social networking.

“In 1987 it was a whole different landscape,” Slash says with a laugh and a sigh, looking back to the start of his old group, Guns N’ Roses. “Still, up until recently, I was wary of the internet and stuff and stuck in my old-school mentality.

"But I also see it as the only way of doing things because the way I used to do things or the way it was just doesn’t f—in’ exist anymore.”

Jeff Varner, of management group the Collective, told TheWrap that for one thing, fans were having a hard time finding Slash online.

"When he came to us back in 2008, he was looking to do some stuff a bit left of center, and a bit more progressive in terms of promotion, especially in the digital realm," Varner said. "He wasn’t on Twitter, wasn’t on Facebook or MySpace, so we got him on them, raised his digital profile. He got a million followers on Facebook almost overnight and he began to get engage with his community."

Like most who dip their toes into the social-media pool, Slash was tentative at first, but quickly found his footing.

"I started using Twitter to put information out there, sorta shameless marketing in real-time. But as time wore on I started talking to people directly from my BlackBerry, and I started having real conversations with fans and not just the die-hards," the rocker says.

With his mane of dark curls, leather pants and top hat, Slash has become as all-American a brand as Apple Pie or Apple computers. He has played with everyone from Ray Charles and Michael Jackson to former “American Idol” Chris Daughtry.
He’s been in cartoon form on Comedy Central’s “Kid Notorious” with Robert Evans, and in “South Park,” as well as being the signature player on the “Guitar Hero III: Legends of Rock” videogame and hitting the bestseller list with his 2008 autobiography.
It was when singer Scott Weiland left his last project, Velvet Revolver, back in April 2008 that the axeman started thinking about a new solo album and a new direction in a vastly changed music industry.
For his new album, Slash formed his own Dik Hayd Records label. He also pulled together a cast of collaborators from the usual hard-rockin’ suspects of Ozzy Osbourne, Iggy Pop and almost every former member of GNR to to Top 40 staples like longtime friend Fergie and Maroon 5 crooner Adam Levine and newer acts like M. Shadows of Avenged Sevenfold.
The self-titled album is a product that has something for almost everyone. “I didn’t intentionally set out to try and reach all the different demographics,” insists the guitarist, “I ended up using people from different genres because it fit the material.”
Intentional or not, it is a potentially far-reaching, chart-topping combination, says Dominic Pandiscia, senior VP of EMI Label Services.
“Fans of each respective vocalist and performer may be inclined to listen to other artists,” says Pandiscia, whose division is working with Slash management on promotion and handling the record’s distribution. “Our long-term message is that this is an album of discovery, and taking that approach both in traditional media and online, we think fans of Slash or the other artists may discover new artists in the process.”
Starting March 23 on Amazon’s Slash Store, the guitarist started posting regular behind-the-scenes video vignettes talking about the collaborations as well as streaming full versions of the 14 songs.
And with the “Your Next Record” contest, Slash and Guitar Center have dangled the rock dream in front of unsigned bands who have until April 30 to win the chance to record a three-song EP with the guitarist and be the opening act at one of his shows.
There are also promotions with Monster Energy Drink; a contest through Ernie Ball guitar strings and a special Slash issue of Classic Rock magazine in the U.K.
Slash will be performing on "The Tonight Show With Jay Leno" on Tuesday, followed later in the week with performances on “Lopez Tonight” and "The Late, Late Show With Craig Ferguson."
Then, after a couple of U.S. shows, it’s on to the more traditional rock ‘n’ roll road of European festivals over the summer and shows in Japan before heading back to tour North America later in the year.
As for the social networking, the connection with that community has become a part of Slash’s day-to-day routine, the guitarist told TheWrap.
In fact, he’s a convert, insisting that technology has become a necessary extension to break down the barrier between artist and fans, especially during the "sad period" that, in his opinion, rock ‘n’ roll is going through right now.
"I’m not going to spend all day sitting around on the computer — that’s not me," he says. "But I like talking to fans, and internet technology is so much better than the meet-and-greets of the old days."
Is all of this too much, even in today’s music market?
There is a risk of over-saturation, Larry Vincent, the srategy director of branding firm Siegel+Gale, told TheWrap.
“You want people to be talking about this two months from now, but you don’t want them complaining about how sick they are of it," Vincent says. "That’s what really worked for Santana back in 1999 with ‘Supernatural.’ A lot of promotion went into that album and it had plenty of flavors, but all of them included the unifying ingredient of one Carlos Santana.”
Still, 1999 is a long way from 2010.
As Ozzy Osbourne, a modern master of reinvention, put it to Slash in the studio: "This f—in’ record better sell!"
x
Looks like you're enjoying reading