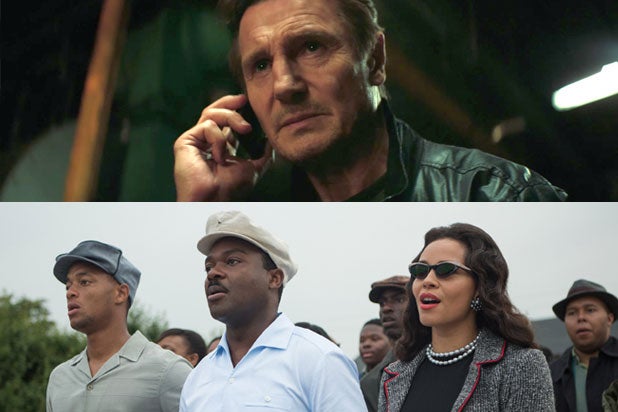 “Selma” is a contender in the Oscar Best Picture race, but the civil rights drama won’t be a match for Liam Neeson’s “Taken 3” when both movies open nationwide this weekend.

The veteran action star will wreak vengeance on baddies and the box office starting Friday, say analysts, who see “Taken 3” rolling to around $30 million and unseating three-time champ “The Hobbit: The Battle of the Five Armies” for distributor 20th Century Fox.

They project that “Selma,” which will be in fewer than 2,400 theaters compared to the 3,593 in which “Taken 3” will play, is going to finish the three days in the mid-to-high teen millions for Paramount Pictures.

Also on Friday, Warner Bros. is expanding the Paul Thomas Anderson crime drama “Inherent Vice” from 16 to more than 400 theaters in its fifth week.

Paramount’s “Selma” has been in the media spotlight this week, and the news hasn’t all been positive, so its opening will test the “there’s no such thing as bad publicity” theory.

The film’s accuracy was called into question by historians, who said it misrepresents the relationship between Martin Luther King and President Lyndon Johnson. And the Ava DuVernay-directed drama, which was nominated for four Golden Globes including Best Picture, was surprisingly passed over for top honors by the Producers Guild on Monday.

“Selma” is based on the 1965 Selma-to-Montgomery voting rights marches in Alabama. David Oyelowo stars as King, Tom Wilkinson as President Johnson, Common as James Bevel and Carmen Ejogo as Coretta Scott King. Oprah Winfrey has a supporting role and is a producer on the $20 million film, along with Brad Pitt, Dede Gardner, Jeremy Kleiner and DuVernay.

It has done well in its limited release. “Selma” opened in 19 theaters on Christmas Day and expanded to 22 for its second weekend, averaging roughly $28,000 and $30,000 per theater, respectively, and accumulating $2.1 million.

The challenge for Paramount marketers is to turn the awareness created by the awards buzz — good and bad — into box office. One positive they’ll emphasize is the response by critics, who have been wowed by “Selma,” which has a perfect 100 percent positive rating on Rotten Tomatoes after 80 reviews.

The reviews on “Taken 3” aren’t nearly as good — it’s at 30 percent on Rotten Tomatoes — but that’s never mattered with these films when it comes to the box office.

“It’s a classic action movie with a beloved main character and we think this is a good slot,” said Chris Aronson, the studio’s head of distribution. Action fans are likely primed, he noted, since the crowded holiday season that just concluded skews toward family and fantasy fare.

“Taken 3” has a $48 million production budget and was financed and produced by the French company EuropaCorp, which is distributing it in France and with partners in several key European territories. The company founded by Luc Besson has a track record of making action films like the “Taken” and “Transporter” series profitable, and scored big last year with the breakout hit “Lucy.”

The social media signs are strong, with ‘Taken 3” at 5.1 million Facebook “likes,” compared to the 2.7 million that the its predecessor had at the same pre-release point.

Also Read: ‘Inherent Vice’ Review: Lots of Sex and Drugs, But Where Are the Believable People?

It connected with critics, who rate it 72 percent positive on Rotten Tomatoes, but it hasn’t found real traction at the box office. “Vice” has taken in $1.4 million after four weeks of limited release.