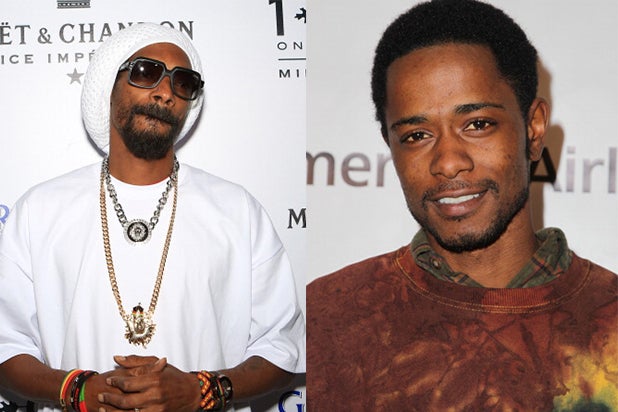 After showing off his rap skills in “Short Term 12,” Keith Stanfield has been cast as a young Snoop Dogg in Universal’s N.W.A. movie “Straight Outta Compton,” TheWrap has learned.

Stanfield will play Calvin Broadus Jr., the soon-to-be legendary rapper known as Snoop Dogg (aka Snoop Lion), who crosses paths with N.W.A. as they both make their way in the rap game.

Snoop isn’t the only other notable real-life figure in the film, as Sheldon A. Smith is playing Warren G and Carra Patterson will co-star as Tomica Woods. Music mogul Suge Knight is also a significant character in the film.

Ice Cube and Dr. Dre are producing with Matt Alvarez and Tomica Woods-Wright, while Gray is executive producing with Will Packer and former Universal exec Scott Bernstein.

Set in the mid-1980s, when the streets of Compton, California were some of the most dangerous in the country, story chronicles the rise and fall of N.W.A. — five young men who translated their experiences growing up into brutally honest music that rebelled against abusive authority and gave an explosive voice to a silenced generation. The film explores how they revolutionized music and pop culture forever the moment they told the world the truth about life in the hood and ignited a cultural war.

Universal executives Jon Mone and Sara Scott will oversee the project for the studio, which will release “Straight Outta Compton” on Aug. 14, 2015.

Stanfield is a rising young star who earned an Independent Spirit Award nomination for “Short Term 12,” which featured his heartbreaking rap song “You Don’t Know What It’s Like.” That film led to his casting in Ava DuVernay’s MLK movie “Selma,” a likely awards contender in which he plays Jimmie Lee Jackson.

Not only did Stanfield just wrap Don Cheadle‘s Miles Davis movie “Miles Ahead,” but he’s also an up-and-coming musician whose hip-hop group MOORS will be performing with Com Truise at the El Rey in October. The band has an EP due out later this year.

Stanfield, who also appeared in Universal’s “The Purge: Anarchy,” is represented by Innovative Artists, IAM Entertainment and Ginsburg Daniels.