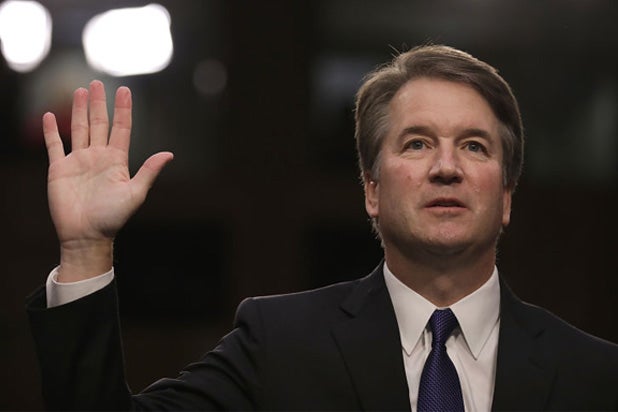 Kavanaugh’s nomination was split down party lines, with all but one member of the Democratic caucus opposing him and all but one Republican backing him. Alaska’s Republican Sen. Lisa Murkowski voted with the Democrats against Kavanaugh, while West Virginia Democrat Joe Manchin split with his party and supported Kavanauagh. The final margin of victory was provided by Sen. Susan Collins of Maine, who announced her support for the nominee in a lengthy Senate floor speech on Friday.

Saturday’s vote was interrupted multiple times by loud protests from the gallery, as Vice President Mike Pence repeatedly called for the sergeant at arms to restore order. “Shame on you!” one protester was heard yelling as the votes were taken.

Shortly after the confirmation, President Trump tweeted, “Later today, I will sign his Commission of Appointment, and he will be officially sworn in.”

The confirmation is a big win for President Trump, who staked much of his political capital backing Kavanaugh. As the vote neared, Trump repeatedly doubled down on the judge, blasting critics and calling the sexual misconduct charges leveled against him a “smear.”

The Senate vote caps weeks of, at times, graphic accusations of sexual misconduct against Kavanaugh from his high school days and years at Yale. On Sept. 27, the judge’s most serious accuser, Dr. Christine Blasey Ford, testified before the Senate Judiciary Committee, saying Kavanaugh tried to rape her while he was intoxicated during a party in the early 1980s.

Later that day, Kavanaugh also testified. With his remarks veering between angry and tearful, he denied misconduct. In what many on the left called a show of political bias, he also called the scrutiny he was under “a calculated and orchestrated political hit, fueled with apparent pent-up anger about president trump and the 2016 election.”

Kavanaugh also faced two additional charges, one from Deborah Ramirez, who told the New Yorker that Kavanaugh thrust his genitals in her face without her consent while at a freshman year party at Yale.

A third woman, Julie Swetnick, said in a sworn statement that she attended parties where Kavanaugh along with his high school friend Mark Judge participated in spiking punch at house parties “with drugs and/or grain alcohol so as to cause girls to lose their inhibitions and their ability to say ‘No.'” Swetnick is currently being represented by Michael Avenatti.

Last week Republican Sen. Jeff Flake threw yet another wrench into the nomination after demanding an FBI inquiry into the misconduct allegations. The move, which GOP leadership had strenuously resisted, delayed the final vote by a week.

The final report of the bureau was never made public and was only viewed by members of the Judiciary Committee, whose assessment of the findings broke down along partisan lines. Republicans like Chuck Grassley said it showed nothing new, while Democrats like Bob Menendez call it a “bulls– probe.”