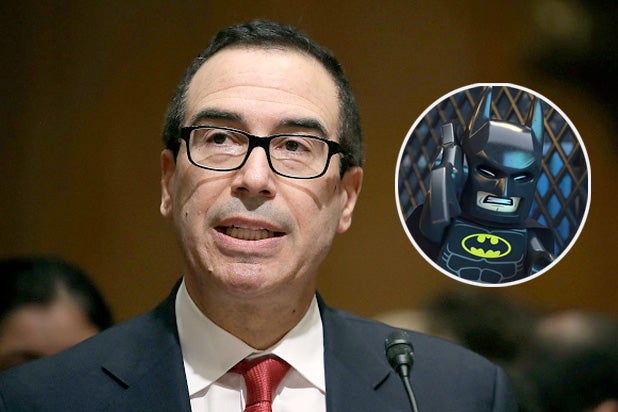 Not everything is awesome for Steven Mnuchin these days…

Democrats on the Senate Finance Committee have called for a probe into Hollywood producer-turned Treasury Secretary Steven Mnuchin’s recent comments, where he seemed to be promoting his latest flick, “The Lego Batman Movie.”

In a letter addresses to the Office of Government Ethics, ranking Democrat on the committee, Sen. Ron Wyden (D-Ore.) is asking whether Mnuchin violated ethics rules when he mentioned the movie last week, which was produced by a company he founded.

“I am concerned that despite his ‘legal disclosure,’ these comments may constitute a violation of Secretary Mnuchin’s January 10, 2017 ethics agreement,” the letter said.

As TheWrap previously reported, Mnuchin essentially pulled a Kellyanne Conway on Friday when he urged an audience at an event to check out his latest flick “Lego Batman,” a movie he produced right before taking on his Cabinet post in the Trump administration.

“I’m not allowed to promote anything that I’m involved in,” Mnuchin told Axios executive editor Mike Allen. “So I just want to have the legal disclosure, you’ve asked me the question, and I am not promoting any product. But you should send all your kids to ‘Lego Batman.'”

Citizens for Ethics and Responsibility and Ethics in Washington admonished Mnuchin for his comments, saying in a statement on Friday: “It’s clear that Mnuchin did not learn any lessons from the Kellyanne Conway affair. This kind of thing happened, and will continue to happen, when there is a White House that does not take disciplinary action for ethical lapses.”

The White House took no disciplinary action against Conway.