WrapWomen is pleased to announce exciting additions to the Power Women Breakfast in Washington, D.C. next Wednesday, June 13, including a panel of award-winning photographers, Iranian feminist and author Masih Alinejad and Senator Amy Klobuchar (D-MN).

A panel of award-winning female photographers will discuss their work  “The Female Gaze: Photographers, Storytellers and Explorers.” Susan Goldberg, the editor-in-chief of National Geographic, will moderate a panel discussion including:

Wrap Editor-in-Chief Sharon Waxman will interview feminist author and activist Masih Alinejad, whose memoir, “The Wind In My Hair: My Fight for Freedom in Modern Iran,” was released last week. She will be joined by Michèle Flournoy, former Under Secretary of Defense for Policy for the Obama administration and founding partner of WestExec Advisors. 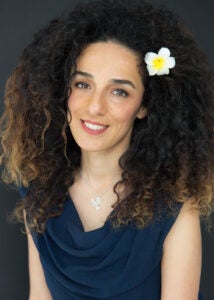 Alinejad is an award-winning Iranian journalist, broadcaster, blogger and founder of the My Stealthy Freedom movement, which encourages Iranian women to express their personal freedom. Alinejad has been forced to live in exile in Brooklyn, New York following her criticism of the Iranian regime. She currently reports and presents a weekly TV segment on VOA, called Tablet, where she mixes hard news and satire.

They join a full program on women’s leadership, including “#TimesUp: How a Hollywood Moment is Becoming a National Movement,” with Amber Tamblyn, author and actress, Hilary Rosen, political commentator, CNN & Partner and Managing Director, SKDNickerbocker and Sharyn Tejani, Director of the Time’s Up Legal Defense Fund, moderated by Washington Post reporter Sarah Ellison.

TheWrap’s Power Women Breakfast series is connecting and inspiring the leading influential women of entertainment, media, technology and brands in the key cities where those women work, create, gather, network and connect.