The Orlando killings sparked a surprise filibuster on gun control Wednesday that lasted over 14 hours and was aired live on CSPAN.

Connecticut Sen. Chris Murphy, who had just been elected when a gunman killed 20 children and six adults at Sandy Hook Elementary School in Newtown, launched the filibuster to call for Congressional action on gun control. Murphy and his colleagues spoke well into the night about seeking to close the terrorist loophole and expand background checks at gun shows and online.

While the filibuster was launched by Democrats, by midnight two Republicans had joined the protest, Ben Sasse (R-Neb) and Pat Toomey (R-Pa).

Murphy began speaking on the Senate floor at 11:21 a.m. ET, and the session was still going on well into the early hours of Thursday morning.

“I am prepared to stand on the Senate floor and talk about the need to prevent gun violence for as long as I can. I’ve had #Enough,” he tweeted early that morning, and stood by his word, showing no signs of fatigue 13 hours later.

I am prepared to stand on the Senate floor and talk about the need to prevent gun violence for as long as I can. I've had #Enough

Murphy vowed that he would stay on the Senate floor “until we get some signal, some sign that we can come together.”

The plea came after Donald Trump said he would meet with the National Rifle Association regarding the terror watch list and gun purchases.

”For those of us that represent Connecticut, the failure of this body to do anything, anything at all in the face of that continued slaughter isn’t just painful to us, it’s unconscionable,” Murphy said, according to the Boston Globe.

When asked by another senator how he was feeling just before 7:30 p.m. ET, Murphy said rehabilitation from a back injury in his 20s had helped him build up endurance. Murphy, a 42-year-old father of two young boys, also said that he is motivated in his mission because he cannot look into the eyes of the Sandy Hook victims’ relatives and tell them that Congress has done nothing since. 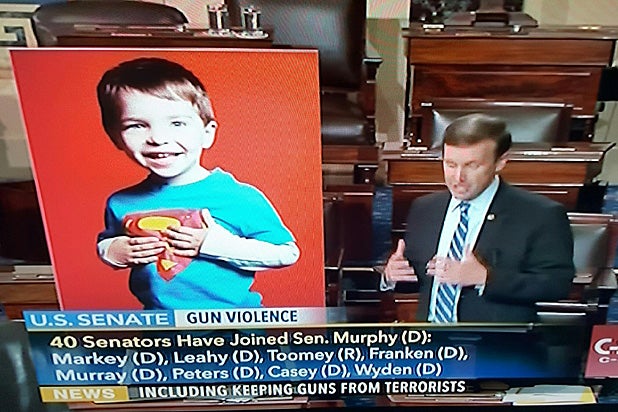 There have been no major changes in gun legislation since April 2007, following the Virginia Tech massacre, which prompted Congress to pass a law to strengthen the instant-background check system.

At almost 1 a.m. ET Thursday, Illinois Sen. Dick Durbin told Murphy: “Senator, it’s been a long day, and now it’s a new day … the intensity of feeling, the stories you’ve heard, I hope they inspire you as they have me.”

As the senator conducting the filibuster, Murphy was not allowed to leave the Senate floor (or even sit down) and therefore not allowed to use the bathroom during the marathon session. Although water and milk are permitted, food (other than hard candy) is not, according to the Globe.

The Orlando attack, which killed 49 and injured 53 others, was the worst mass shooting in the U.S.

“It has felt like we are right on the precipice of accepting this as the new normal,” Murphy said. “Great change movements are defined by their obstacles and their failures … This change movement isn’t defined by what we do here, it is defined by the 90 percent of Americans who believe in the riotous of what we are proposing.” 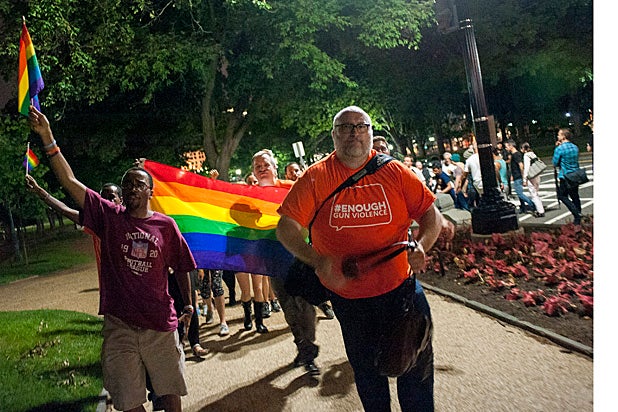 The hashtag #filibuster soon trended on Twitter, with many social media users copying Murphy’s #Enough. Outside the Capitol building, anti-gun activists marched with messages of love and unity, many carrying rainbow flags to support the LGBT community.

Also Read: The NRA Started Tweeting Again As Soon As We Asked Why They Stopped

“We cannot let the dream of our country die, and be dashed and be killed,” he said. “We can do something about it … it is unacceptable when you have the power, to do nothing.” 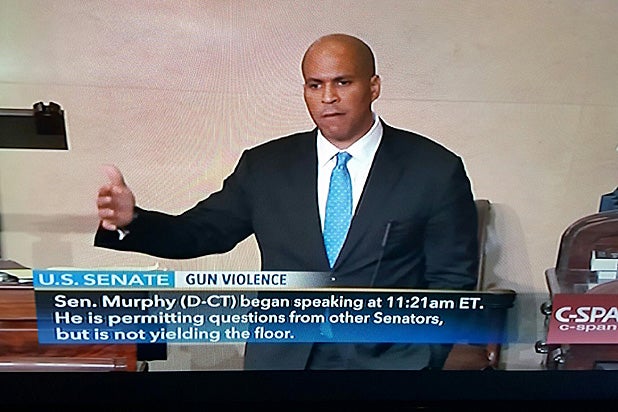 Earlier in the evening, Wisconsin’s Tammy Baldwin, the first openly lesbian elected senator, gave voice to the special effect the Orlando attack has had on the LGBTQ community.

“A hate crime is a crime that targets a particular audience, a particular group in order to send terror throughout that community … to wake up and see this was truly unspeakable,” she said.

Massachusetts Sen. Elizabeth Warren recalled how much fun she has each year dancing at Boston’s Gay Pride parade, before telling the stories of two Massachusetts natives who were killed in the Orlando shooting, while another is only alive because the “gunman missed his head as he shot those who were lying on the floor to make sure they were dead.”

“We have to choose how we respond to this … All of us will decided if we will come together or splinter apart,” she said. “Through all that shouting, we miss what should be obvious — it was a terrorist with a gun who killed all those people.”