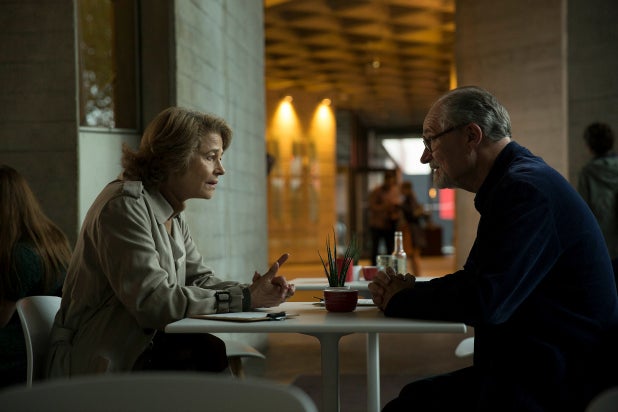 Handsomely mounted and deeply sincere, “The Sense of an Ending” is the kind of film that probably couldn’t be made in America, or in any other country without a government-backed entity like BBC Films to partially underwrite it.

Based on the Booker Prize-winning novel by Julian Barnes, this is a production about Very Uncommercial Things: aging, regret, and the sneaking suspicion that we’re all somehow passengers in our own lives. It’s also a film that fairly reeks of anti-cinematic cultural imperatives. A universally acclaimed but very internal British novel has been translated to the screen mostly to cement its status as a literary benchmark, and this despite the fact that what’s best about the book (shimmering prose, a nuanced depiction of an aged man’s inner life) has been jettisoned by the movie.

A gimlet-eyed and self-deprecating Jim Broadbent is Tony Webster, the aged owner-operator of what must be London’s smallest storefront business: a camera shop wedged into the foyer of a mid-century commercial building and dedicated exclusively to the sale and refurbishment of classic Leica cameras.

There’s a quiet obsession behind the hyper-specificity of Tony’s inventory. Back in the mid-1960s, Tony’s first love Veronica (Freya Mavor, “Skins”) introduced him to the Leica brand before running off with his best friend Adrian (Joe Alwyn, “Billy Lynn’s Long Halftime Walk”) and causing a wound Tony still carries, 50 years on.

A last will and testament thrusts Veronica back into Tony’s life after decades apart, where he finds her as enigmatic as ever (and played by a warily coquettish Charlotte Rampling, in a very small role unworthy of its star billing). Adrian left a diary, and Veronica’s wicked mother (Emily Mortimer, impactful in just two scenes) has willed it to Tony. But as executor of mom’s will, Veronica refuses to hand the possibly revelatory pages over. The re-emergence of so many old ghost pitches Tony into his own past, where he must confront both his lack of closure and his own role in a forgotten tragedy he and Veronica share.

As he demonstrated more assuredly with his sweet comedy of yearning “The Lunchbox,” director Ritesh Batra has a knack for the nuances of human interaction. Though they lopside this movie by underscoring subplot at the expense of plot, the scenes between Broadbent and Harriet Walter (“The Crown”) as his patient and compassionate ex-wife are soulful and lived-in. Broadbent is incapable of giving a false performance, and he does fine, if perhaps too sprightly, work here. But as a couple, Broadbent and Walter radiate familiarity and tenderness — the very embodiment of how a severed union can remain intact.

“The Sense of an Ending” is bracketed by extended and lyrical narration sequences suggesting the other and perhaps better movie that might have been. In the hoary received wisdom, words are “uncinematic,” and novels must therefore be “opened up” and externalized for the screen. But had this well-meaning movie been more willing to directly embrace its origins in Barnes’s luminous prose, it’s quite possible “The Sense of an Ending” might be something special rather than something worthy. It’s not quite the same thing.