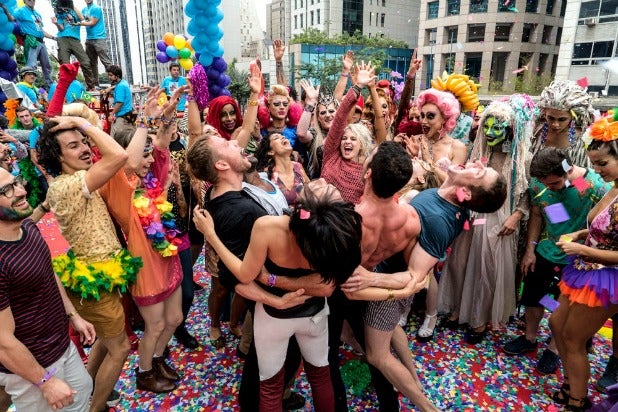 “It turned out that Lana loved our letter and thought it made a certain amount of sense — as crazy as it is,” Hawkins said in an interview with TheWrap. “Of course, it’s still an uphill climb, but we told them if there’s anything we can do to help bring back the show, we’re game.”

“We’ve also seen interest from a number of mainstream production companies and filmmakers,” he continued. “I think a lot of people in Hollywood are intrigued by what we proposed, and Hollywood follows the money. So we’re looking at proposals and setting up calls.”

Hawkins also discussed whether their version of the series would show penetration, how they can afford to finance such an expensive project and whether their company can realistically shake its porn-industry stigma to become the next Netflix.

TheWrap: Are you looking to a make a sexier version of the show? Would you show penetration?

Alex Hawkins: We’d need to negotiate with the producers and the actors, but yes, ideally we’d want to push the line more than was allowed on Netflix. If we could get penetration, of course we’d include it. Why be shy about sex? We’re a different type of platform. It could be that those scenes would be extended, or that they’d be more explicit.

What is it about “Sense8” that feels like the right fit for your company and your audience?

Our audience is a global community that comes together around sex and sexuality. We’ve talked about ourselves as a type of sensate.

“Sense8” is wildly expensive in its Netflix version. How would you pay for that, and would have to find a way to trim the budget?

We made the proposal to be the distribution platform. If they accept the offer, that’s where the negotiating comes in. We have a tremendous audience, but we’re not a mainstream channel, and our revenue model is different. That has advantages and disadvantages. I think most of all, we’d want to be creative, both in how it’s filmed and how we execute it.

Has your company been trying for a while to follow the Netflix model of becoming a widespread entertainment platform, or did this just come about because “Sense8” happens to appeal to your audience?

Would the Wachowskis still be involved? Is the plan to use the Season 3 scripts that they’ve been working on, or would you want to have creative input?

I can’t imagine it going forward without the Wachowskis being involved. We wouldn’t want to do it, and I can’t imagine they’d let us take their baby. We’re not producers, we’re not experts. We’re a platform.

Also Read: 'Game of Thrones': How HBO Beat Its Hackers

Have you heard anything from the Wachowskis, other producers, Netflix or the cast? Do sense “Sense8” fans appear to be onboard?

We were contacted by the “Sense8” team a few days after the letter, and set up a call. We were quite surprised. We were genuine in our offer, but we knew it was a long shot that they would even consider reaching out.

What’s been clear with “Sense8” is that it’s a fan-driven show. Fans were instrumental in bringing back the series for the two-hour finale, and they’ll be central to whatever happens with that third season.

There’s certainly stigma, but Hollywood loves nothing more than a good, come-from-behind success story. And I think the audience goes where the programming is.

Would you use your company name in marketing, or would you maybe create a neutral site with a new name to host your non-porn content?