(Note: This post contains spoilers for the Aug. 13 episode of “Game of Thrones.”)

The fifth episode of “Game of Thrones” Season 7, “Eastwatch,” saw the long-awaited return of a fan-favorite character — and a reference to the jokes people have been making for years about his apparent disappearance.

In “Eastwatch,” Ser Davos (Liam Cunningham) heads back to the poor Flea Bottom district of King’s Landing, after delivering Tyrion Lannister (Peter Dinklage) to a secret meeting with his brother Jaime (Nikolaj Coster-Waldau). In Flea Bottom, right where he was when fans first met him in Season 1, was Gendry (Joe Dempsie), a major character for the first three seasons of “Game of Thrones” who just up and disappeared.

Gendry was a big deal to the story because he’s the last living bastard son of King Robert Baratheon (Mark Addy). Jon Arryn, Robert’s old Hand of the King, found Gendry (and other bastards) around King’s Landing and deduced that Joffrey (Jack Gleeson) and his other children by Cersei Lannister (Lena Headey) weren’t actually Robert’s kids. He took that information to the grave, but Ned figured out the same thing when he found Gendry, and tried to get him out of King’s Landing before Joffrey could have him killed to stop him from threatening his claim to the throne.

For the next season, Gendry hung out with Arya Stark (Maisie Williams) as they headed north to the Wall. They were stopped by the Brotherhood Without Banners, who sold Gendry to Melisandre (Carice van Houten) also known as the Red Woman. Melisandre wanted to use Gendry’s royal blood to do her blood magic for Stannis Baratheon (Stephen Dillane), which would have meant killing Gendry.

Instead, though, Davos saved Gendry’s life. The Onion Knight put Gendry in a boat and told him to row — and that was the last time anyone saw Gendry for four full seasons.

Also Read: 22 Big “Game of Thrones” Fan Theories for Season 7 and Beyond (Photos)

Fans have been joking about Gendry’s disappearance ever since he vanished into the night — Gendry rowing forever is the most famous meme to come from that. When they met again, Davos made a joke that was definitely a wink from the “Game of Thrones” writers to their fans on the Internet. “Thought you might still be rowing,” Davos said on finding Gendry — in other words, wink.

Here are a few of the best gags referencing Gendry’s lengthy time at sea. 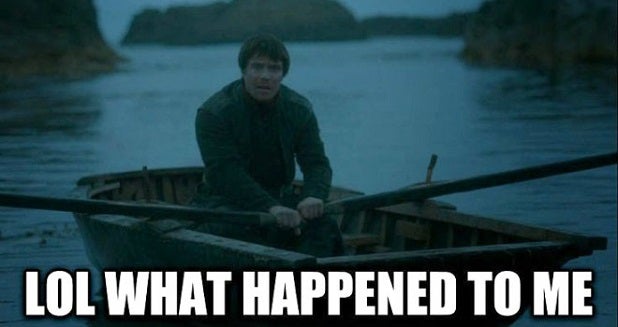 Also Read: ‘Game of Thrones': What Did Sansa’s Note That Arya Found Say? 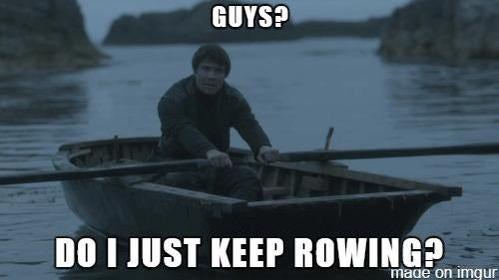 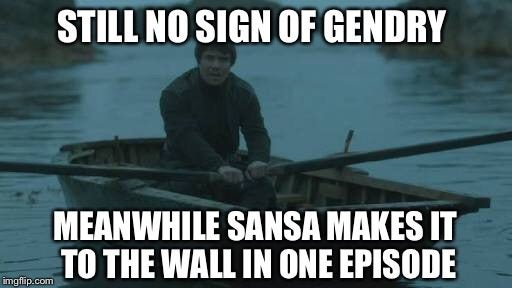 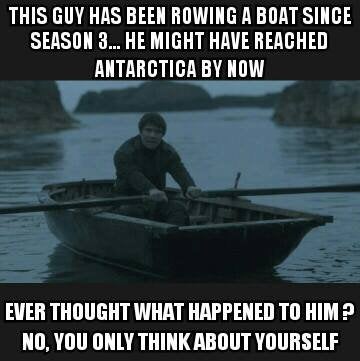 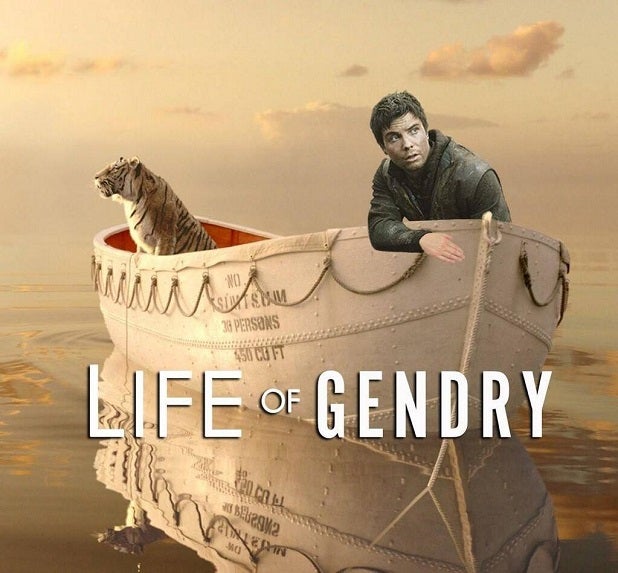