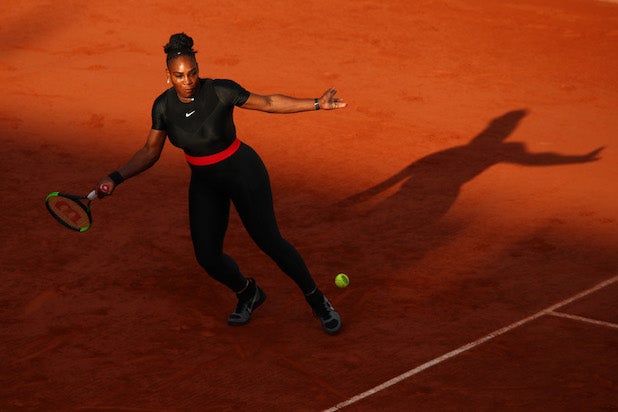 Friday’s announcement that the French Open will now ban Serena Williams from wearing her “Black Panther”-inspired catsuit on the court at Roland Garros stadium has sparked outrage from fans.

Many Twitter users called Williams, who has 23 Grand Slam singles titles to her name, the “G.O.A.T,” meaning the greatest of all time, and used the hashtag #getoffhercourt.”

“The game seems quite content to be played no matter what women wear,” prolific TV producer Rhimes tweeted in response to the ban.

“This article should read, “@serenawilliams could show up in pajamas with her kid strapped to her back and we’d still be lucky to have her,” Amell said, while retweeting ESPN’s report.

In addition to the Wakanda-inspired catsuit making her feel like a superhero, Williams also wears the black compression bodysuit for health reasons. After suffering from medical complications, specifically blood clots, following the birth of her daughter last year, the 36-year-old said she wears pants to help with circulation.

However, her choice of athletic wear did not sit well with the French Open, a competition she has won three times. In an interview with Tennis magazine for their 500th edition, French Tennis Federation president Bernard Giudicelli said a new dress code would be introduced to the competition, one that would prohibit Williams from wearing her catsuit.

“It will no longer be accepted,” Giudicelli said, according to the Associated Press. “One must respect the game and the place.”

Rhimes countered Giudicelli in her tweet. “Perhaps this man should focus on his own fashion choices and respect the GOAT’s rights to wear whatever the hell she pleases,” she wrote.

Williams is set to begin play at the 2018 U.S. Open starting Monday but canceled her appearance at Media Day on Friday, with a USTA official announcing to the crowd that her daughter Olympia, was “under the weather.”

See outraged tweets about the catsuit ban at the French Open below.

The policing of women’s bodies must end. The “respect” that’s needed is for the exceptional talent ⁦@serenawilliams⁩ brings to the game. Criticizing what she wears to work is where the true disrespect lies. https://t.co/ioyP9VTCxM

The game seems quite content to be played no matter what women wear. Perhaps this man should focus on his own fashion choices and respect the GOAT's rights to wear whatever the hell she pleases. #getoffhercourt https://t.co/sS7QcyJp3y

The amount of control men feel the need to exert over women is petty-level with this one. @serenawilliams is the GOAT. The game respects HER. https://t.co/nXEYCcKZPj

She is not wearing crotchless panties for God’s Sake.

This article should read, “@serenawilliams could show up in pajamas with her kid strapped to her back and we’d still be lucky to have her.” What a loser. https://t.co/PPOBaUYXPH

Dear Serena Williams, Your cat suit looks great, and I should know. I have 14 cats. Besides, you practically ARE tennis.
Love,
An admirer

You got to be kidding me. @serenawilliams is just the greatest woman tennis player in history, saved American tennis, and you’re changing the rules to ban her fashion choice. Embarrassing decision French Open officials! https://t.co/9sGObuuKbo

TheWrap has reached out to Serena Williams for comment.