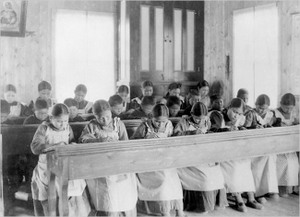 Will anyone notice Ian Austen’s story today, buried in the NYT’s Foreign section, about Canada formally apologizing to the country’s Native Americans, for forcing them into residential schools where they were physically and sexually abused? This is major news. Canada has apologized, and agreed to pay nearly $2 billion in reparations. It will establish a truth and reconciliation commission so that the true suffering inflicted on Native Americans can be aired and acknowledged. Where are we in America on this issue? Absolutely nowhere. But know this: the very same abuse by members of the clergy, priests, nuns, teachers in Canada was inflicted on Native Americans on this side of the border. Does this occur to no one at the New York Times or elsewhere? To members of Congress? Why is there no interest in this huge story of racial injustice? I wrote an investigative piece on this topic in 2003 at the Washington Post, which resulted in the removal of one of the priests interviewed in the story. But the tales of abuse that I heard, and that I guard closely in my archives, were among the most chilling things I have ever heard in 25 years as a journalist. Here is that old story. Shame on all of us.