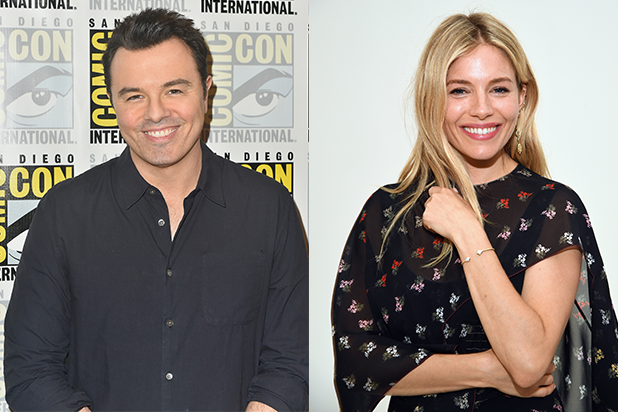 The project is based on New York Magazine reporter Gabriel Sherman’s best-selling book, “The Loudest Voice in the Room,” which details Ailes’ rise to power and how he built Fox News into a cable news behemoth. The series will also address the sexual harassment accusations and monetary settlements that brought his Fox News reign to an end. Ailes’ tenure at the network ended in July 2016 in disgrace following a lawsuit filed by Gretchen Carlson, who accused Ailes of sexual harassment. More women followed Carlson with similar accusations against Ailes. He died in May 2017 at the age of 77.

Miller portrays Ailes’ wife, Beth, a former NBC news producer who married him in 1998, shortly after the founding of Fox News. Following Ailes death, she has continued to refute any charge that her husband was less than innocent.

MacFarlane, who has publicly gone after Fox News in the past, will play Brian Lewis, Fox News’ former public relations chief for over 17 years and Ailes’ closest confidante and supporter. Lewis spent his career promoting and protecting Ailes until the media machine turned against Lewis and ended his career. Wallis will play Laurie Luhn, a volunteer who, under Ailes’ mentorship, rose to head of booking at Fox News. Giving into Ailes’ growing demands, she began a long abusive relationship with him that impacted the rest of her life.

The four join Naomi Watts and Russell Crowe, who will play Ailes in the eight-episode series. Watts will portray Gretchen Carlson, who was the first woman to file a sexual harassment suit against Ailes.

The Showtime series will focus primarily on the past decade in which Ailes arguably became the Republican Party’s de facto leader, while flashing back to defining events in Ailes’ life, including an initial meeting with Richard Nixon on the set of “The Mike Douglas Show” that gave birth to Ailes’ political career.

The project is a co-production from Showtime and Blumhouse Television, which originally optioned the rights to Sherman’s book and brought the project to Showtime, and is managing physical production. Sherman co-wrote the first episode with “Spotlight” director Tom McCarthy, who will executive produce alongside Jason Blum. “Handmaid’s Tale” alum Kari Skogland will direct the first two episodes. Production is set to begin next month in New York.

The Showtime limited series is one of two projects based on the former head of Fox News. Annapurna Pictures was developing a feature film about the sexual misconduct allegations aimed at Ailes, with John Lithgow playing the former Fox News CEO, Charlize Theron as Megyn Kelly, and Malcolm McDowell as Murdoch. The studio, however, dropped the project this week amid financial difficulties that resulted in the exit of its film division head.