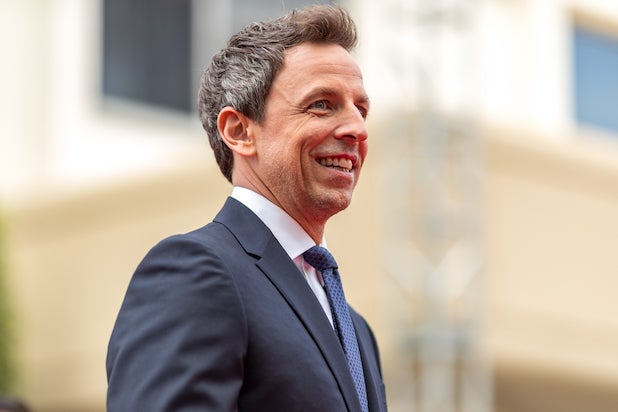 “Late Night” host Seth Meyers brought the funny for the Peacock during NBC’s 2018 upfront presentation on Monday — by poking fun at everything about his own network.

Meyers welcomed the crowd at Radio City Musical Hall with a bit about why ad execs were forced to head to NYC on Mother’s Day weekend to see the broadcast network’s presentations (something about colored wristbands?), and then he got into the real material.

See Meyers’ best jokes from his monologue below.

“NBC, as you all know, stands for Nothing But Chicago. We got ‘Chicago Fire,’ ‘Chicago PD,’ “Chicago Med’ — everything but Chicago accents. That, that would be going too far. No one wants to watch a medical drama where the doctor says [imitating Chicago accent] ‘Get me the DFIb over there! STAT!’ Ohh, we lost him!'”

On that 11th hour “Brooklyn Nine-Nine” pickup from Fox:

“I have to say, for NBC this upfronts week got off to a dramatic start when NBC picked up ‘Brooklyn Nine-Nine’ after Fox canceled it. Yeah, fantastic news for a great show. But it still feels a little bit like NBC is Fox’s deadbeat friend. ‘Hey, uh, you gonna finish that? Can I have it?'”

On further developments in the Matt Lauer scandal:

“It’s not surprising for NBC to be dramatic, we are home to the No. 1 drama on television. A show that each week gives us twists and turns, heartbreaking reveals, and this season the departure of a once-beloved character. I’m talking of course of, ‘This Is the Today Show.'”

“NBC aired a live version of ‘Jesus Christ Superstar’ this year starring John Legend… You know a network has some range when they have a black Jesus and a Megyn Kelly.”

On those pricey Super Bowl ads and Stormy Daniels:

“Advertisers paid over $5 million for a 30-second ad at the Super Bowl this year, which is a lot. That is a lot, considering Donald Trump only paid $130 [million] to Stormy Daniels for the exact same amount of time.”

On “Will & Grace” revival success and why it’s crazy to revive the ‘Cosby Show,’ right?:

“It’s now my honor to introduce two people whose reboot was so successful I’m sure at least one exec at NBC says, ‘We can’t bring back the ‘Cosby Show,’ right? Right? No, of course not! No, I’m just saying it. But, of course not! I was just blue skying it, but of course not!”