Seth Meyers is fed up with the insanity in Arizona as it continues its sham election “audit,” and he compared Republicans that support the effort to crazy town hall attendees — and what it would be like if insects joined in on that crazy town hall.

During his latest “A Closer Look,” Meyers highlighted all the different (but equally improbable and unhinged) theories about election fraud in Maricopa, Az., from fringe nonsense like the claim ballots were flown in from Asia (and can be identified because the paper contains bamboo, which to be clear is insanse) to the idea that pro-Trump ballots were fed to chickens that then were incinerated — you know, just to extra make sure the evidence was gotten rid of.

Of course, it’s important to repeat that none of those absurd ideas are true. There is still zero evidence of any voter fraud in Arizona and federal judges across the country, some even appointed by Trump, have rejected bogus claims the election was anything other than legitimate. 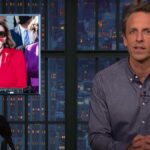 Meyers also pointed out that while it’s easy to dismiss the Arizona recall as supported by “fringe weirdos” who are seeking to undermine the democratic process, there are some legitimately elected political figures who are going along with it including Arizona state senate president and Republican Karen Fann.

Meyers then threw to a clip where Fann tried to tell a CNN reporter the audit was “transparent” and “live streamed,” to which the reporter quickly pointed out it’s only streaming on OANN, which is “not a credible news source.” And she’s right.

“In addition to being craven and delusional many of the elected lawmakers in Congress and state legislatures who make up the core of the Trump cult are also just super dumb,” Meyers said.

After dunking on lawmakers who are peddling Trump’s “big lie” the election was stolen like Marjorie Taylor-Greene, Matt Gaetz and Texas congressman Louie Gohmert – who Meyers joked his name sounds “like an anti-Texan slur, look at this freakin’ Gohmert with his American flag crocs” — Meyers compared the election conspiracy rhetoric to something out of a crazed town council meeting. 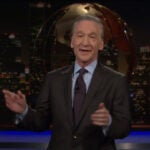 In particular, Meyers was revisiting Greene’s comments where she said wildfires in California were caused by a “Jewish space laser.”

“Normally, when you hear that kind of talk, you’re at a local community board meeting where everyone gets five minutes to raise an issue,” Meyers said. He then imitated a smoking cockroach, who was next up to the dais along with a cicada.

Periodical cicadas are famously back after over a decade of hibernation and are swarming up and down the east coast. Wildlife enthusiasts and scientists are getting a kick out if, especially this photographer in Virginia who takes photos of the giant insects in miniature scenes.

“Oh, what no smoking indoors? Since when, 2003? Well if it’s been that long someone should tell the cicadas,” Meyers joked in a gravelly voice before also imitating a cicada at the meeting that said, “it’s wonderful to be back. After 17 years underground, I can’t wait for 17 great years above ground in the best city in the world!”

Things went from there with the cicada apparently unaware that it will not live for 17 more years. Check out the full clip above.