After 18 months of not being able to have drinks with friends in person, Seth Meyers managed to bring back his “Day Drinking With…” segment this week, heading to the bar with Lorde. And yes, it inevitably ended with Meyers drunkenly performing Lorde’s own music for her.

Of course, the late-night host was pretty drunk at that point. Prior to his performance, he made several drinks for Lorde, trying to introduce her to concoctions beyond her go-to martini. Naturally, they were all based on her songs.

That included mixes like the “Solar Power,” an atrocious mix of iced coffee, Red Bull, espresso beans and Four Loko. Surprisingly though, according to Lorde, it was “Honestly, not bad. I don’t hate that.” She was decidedly not a fan of the “Everybody Wants to Rule The World.” That was a combination of sake from Japan, whiskey from Ireland, red wine from France, and finished off with “the most American of drinks,” White Claw. 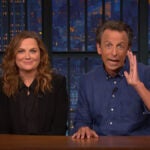 With a few drinking games tossed in, the host and the pop star were decidedly sloshed by the end of the segment. But, before they could wrap things up, Meyers wanted to voice just one criticism of Lorde’s music: “You have a beautiful voice, [but] it’s easy to imitate. Like, anyone could do it.”

From there, it devolved into an all-out performance, with Seth singing and dancing around the room to “Green Light.” Though Lorde winced and grimaced her way through the first half, she did eventually come around, singing along with Seth for pieces of the chorus.

Still, she took her opportunities to mess with him when she saw them. At the beginning of the segment, Meyers promised to learn Lorde’s real name — Ella Marija Lani Yelich-O’Connor — by the end of their time together. For every time he got it wrong, he had to take an additional shot. And by the end of his drunken serenade, he definitely didn’t remember it.