Seth Meyers had a good laugh on Wednesday night, as he poked fun at what Texas Senator Ted Cruz seems to think is happening in Disney parks and programming.

During a recording of his podcast this week, the senator once again complained about Disney’s opposition to Florida’s “Don’t Say Gay” bill, and griped that “there are people who are misguided, trying to drive Disney stepping in, saying, you know, in every episode now they’re going to have, you know, Mickey and Pluto going at it.”

When Cruz’s co-host sarcastically thanked him for painting that mental image, Cruz took it one further, saying “it’s just like, come on, guys, these are kids and, you know, you could always shift to Cinemax if you want that!” 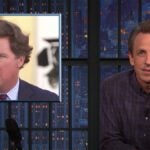 “You can?! Which Cinemax package do you have?” Meyers joked. “And just remember, any time you come up with some kinky idea involving two cartoon characters, pornography has beat you to it. I bet if you Googled ‘Mickey and Pluto,’ the top auto-complete options would be ‘go on a picnic,’ ‘go on a drive,’ ‘go to town on each other.'”

Meyers then questioned how and why Cruz was able to imagine that example so quickly and so explicitly.

“The point is, Ted Cruz jumping to that conclusion makes it clear he already has some pretty pervy ideas about the Magic Kingdom,” Meyers said. “I’d hate to hear why he thinks it’s called Splash Mountain.”

Meyers then joked that Cruz probably thinks that the Country Bears Jamboree performance features the animatronics singing Marvin Gaye’s “Let’s Get It On.”

You can watch Meyers’ full “A Closer Look” segment in the video here and above.