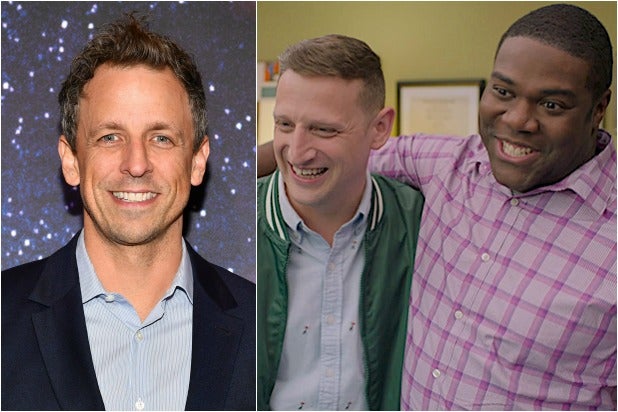 Count Seth Meyers among those lamenting the demise of “Detroiters.”

In an op-ed for Vulture on Friday, the “Late Night” host professed his love for the sitcom, which was canceled earlier this week by Comedy Central after two seasons. “I am sad that, for now, ‘Detroiters’ will not have a third season,” he wrote. “I am hopeful that a network looking for a new jewel to fill its schedule will rescue it.”

Meyers specifically called out the episode “Hark Motors,” as something that should’ve been lauded by critics the same way that the “Teddy Perkins” episode of FX’s “Atlanta” was.

“Not only does it also include a trip to a strange man’s mansion (this time, it’s the great Kevin Dorff), but you will also see my favorite special effect in a decade,” he wrote. “It’s a car that s—-. In fact, I would urge everyone to watch the cold open of this episode, which includes a full-throated defense of the superhero the Flash, a child slapping a grown man, a woman being told to hold onto a rope so she doesn’t slide around in the back of a van, and five other great jokes all in under two minutes. It was brilliantly stupid.”

Meyers isn’t the only one who is hopeful the show will find a new home. Creator and star Sam Richardson (“Veep”) is also holding out hope that his comedy “will find a home elsewhere.”

“Sadly, @Detroiters won’t be picked up for a season 3 at Comedy Central,” Richardson wrote Tuesday on Twitter. “I want to thank everyone who watched and supported the show. It was a dream to make and I’m proud that those who did see it enjoyed it. Maybe it will find a home elsewhere, who knows? But truly, thank you.”