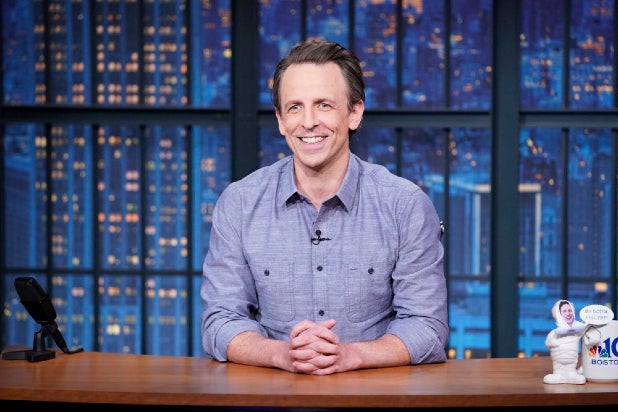 Seth Meyers has renewed his deal with NBC and will host “Late Night with Seth Meyers” through (at least) 2025.

Additionally, Meyers’ and Mike Shoemaker’s Sethmaker Shoemeyers Productions now has an overall deal with Universal Studio Group through 2025. The production company formerly had a first-look deal in place there.

Sethmaker Shoemeyers Productions currently produces Peacock’s “A.P. Bio” and “The Amber Ruffin Show.” Ruffin is a writer on “Late Night” who rose to stardom through her on-camera characters and segments.

“Seth is a rare talent who makes America laugh and think every night,” Katie Hockmeyer, executive vice president of late-night programming for NBCUniversal Television and Streaming, said on Friday. “His ‘Closer Look’ segments are classic combinations of comedy with commentary. Seth is a brilliant stand-up comedian, interviewer and political commentator. His voice matters more now than ever.”

“Late Night with Seth Meyers” has been nominated for an Emmy Award for Outstanding Writing for a Variety Series for the past four years. Meyers is the former head writer of “Saturday Night Live.”

Meyers took over “Late Night” from Jimmy Fallon in 2014, when Fallon succeeded Jay Leno at “The Tonight Show.”

Season-to-date, “Late Night” is beating James Corden’s “Late Late Show” on CBS in both the key adults 18-49 demographic’s ratings and among total viewers — despite their respective lead-ins, “The Tonight Show Starring Jimmy Fallon” and “The Late Show with Stephen Colbert,” ranking in the reverse order.