Seth Meyers is certainly unhappy about the Supreme Court’s decision to overturn Roe v Wade, but he’s also mad at right-wingers who are insisting that abortions haven’t actually been banned as a result. The late night host called it “the sh–tiest Jedi mind trick I’ve ever seen” on Tuesday night’s “Late Night.”

During his “A Closer Look” segment, Meyers went on an outright tear against the Supreme Court, calling it a “rogue” entity and “a corrupt and anti democratic institution.” But between lambasting the court for its recent decisions — and implied upcoming rulings — the late night host also scorched right-wing politicians and media personalities for their own responses.

At that, Meyers backed up his assertion by playing a supercut of clips from people like Senator Marsha Blackburn, Sean Hannity, Senator Marco Rubio and more, in which they all say some variation of “nothing’s been banned” following Roe v Wade’s reversal. 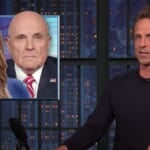 “Nothing’s been banned, are you insane? This is the sh–tiest Jedi mind trick I’ve ever seen,” Meyers mocked. “Of course, with a Jedi mind trick you usually need to be able to project calm, and Hannity is incapable of that.”

Meyers then cited the fact that at least 13 states had trigger laws in place that made abortion immediately illegal as soon as the Roe reversal was handed down, or will make it illegal within 30 days. He also reminded people that several states are preparing to join those 13, impacting literal millions of people.

“This ruling was not theoretical. It put millions of women and people who become pregnant in jeopardy immediately,” Meyers said seriously. “These guys don’t issue hypothetical rulings. It’s a rogue court, hellbent on remaking America as an authoritarian right wing theocracy. Conservatives have shattered the court and shredded whatever remaining legitimacy it may have had.”