Seth Meyers used most of his “A Closer Look” segment on Monday night’s “Late Night” to tear into Rudy Giuliani, dubbing him “the weirdest man in the history of politics” and likening him to a “human pop-up book.”

The latter dig came as Meyers hypothesized that there are currently two types of former Trump aides: ones who insist they continued working for the twice-impeached former president to keep an eye on him but are willing to reveal everything they saw now in a tell-all book, and ones like Giuliani, who is generally just an open book — albeit a terrifying one.

“Rudy is like a human pop-up book. The kind you return to the store because it gave your kid nightmares,” Meyers joked. “Should be noted, if Rudy was a kid’s book character, he would be Reverse Cinderella. He used to be known as America’s mayor, and now you wouldn’t be surprised to see him trying to drive a giant pumpkin.”

Meyers went on to say that he’s pretty confident that “Rudy is the weirdest man in the history of politics,” but then marveled at the fact that “he does not seem in any way aware of his weirdness, or the perception of him as a weirdo.” 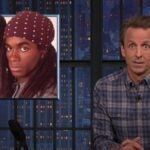 As an example, Meyers called on the fact that Giuliani recently pulled out of appearing in front of the January 6 committee because he wouldn’t be allowed to record the interview.

“Is he worried they’re gonna cut it together to make it sound bad? That’s what his brain already does to his mouth,” Meyers said. “Why do guys like Rudy always have some weird angle, like, thinking they’re a genius chess master calling their bluff by asking to record the meeting? But any time Rudy has ever been recorded, it’s always been bad for him!”

“Rudy records himself saying incriminating things all the time! Before he talks to anyone, he should pat himself down to make sure he’s not wearing a wire,” Meyers joked.

You can watch Meyers’s full segment in the video here and above.