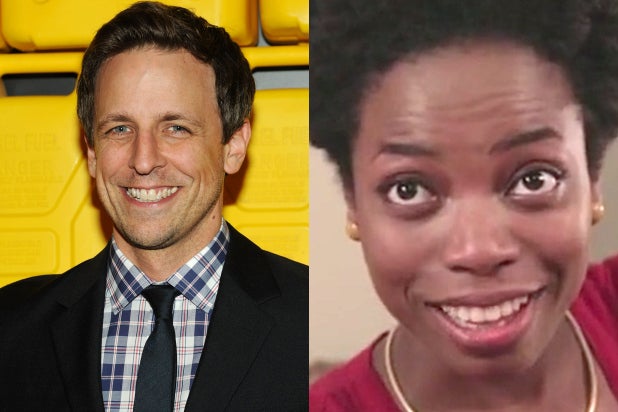 Seth Meyers celebrated and cherished new “SNL” cast member Sasheer Zamata’s first week and show, something that he will likely never get to experience first-hand again.

The show, which returned Saturday with host and musical guest Drake after a several-week holiday hiatus, was business as usual Meyers said, but there was surely a little something extra in Studio 8H and its writers’ room.

“It’s always exciting when there’s new blood there,” Meyers told TheWrap during a one-on-one interview a few hours before his Television Critics Association Panel. “Those are exceptional weeks that stand out … Regardless if there’s more or less press.”

“I was just happy because in the end I think she got as honest a first week as anyone gets,” Meyers continued on Zamata. “The show didn’t make too much of a deal of it other than just having a new cast member to use.”

“One of the biggest thrills of working on ‘SNL’ is being there for people’s first shows, and that is probably the last first show I’ll ever be there for,” Meyers concluded. “So it was slightly emotional.”

A media storm erupted early in the “Saturday Night Live” 2013-2014 season when cast member Jay Pharoah criticized his employer for not having a black female cast member. Fellow castmate Kenan Thompson took up for the show and their shared boss Lorne Michaels, saying that no one who fit the bill was ready.

Zamata had a limited but noticeable role in her first episode, playing Thompson’s fill-in wife in the sketch comedy show’s bar mitzvah cold open and Rihanna later in a “Before They Were Stars” sketch about ’90s TV.

“SNL” previously responded publicly to the controversy in its own humorous way, with a November cold open that required host Kerry Washington to play numerous black female celebrities. The episode and sketch was one of Meyers’ favorites of his final run.

“That was a really, really fun, exciting week and Kerry was an excellent person to have there at the time,” Meyers told TheWrap. “Looking back at this year and having stayed on until the launch of the new show, that was one of the weeks that I was sort of happiest to be there for it.”

Meyers told TheWrap that he will likely do two more new episodes of “SNL” before leaving permanently for his new “Late Night” gig, which debuts on Feb. 24. Those episodes will be hosted by Jonah Hill on Jan. 25 and Melissa McCarthy on Feb. 1.