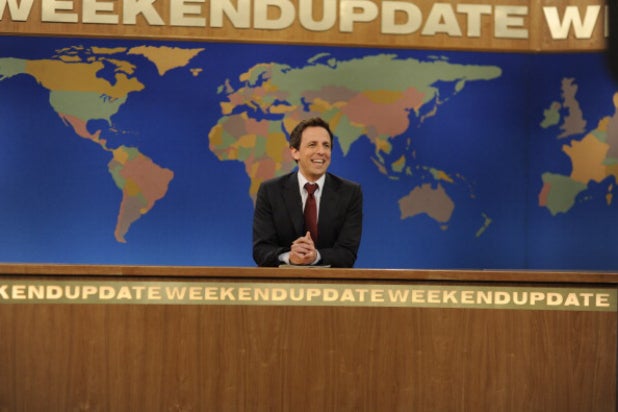 Seth Meyers will likely be two and out when it comes to the remainder of his long-standing “Saturday Night Live” tenure.

“We feel pretty strongly that I’m two shows away from cutting ties,” Meyers told TheWrap. “I mostly just think its too hard to try to do two of these things at the same time.”

“The ‘SNL’ schedule is insane, and it’s probably a little insane that I’ve stayed as long as I have,” he added. “But I love it so much, I really have tried to get every last bit out of it. It would have been depressing not to be here for these last three shows.”

As for his replacement at the Weekend Update desk, Cecily Strong will stick around — but very likely not alone, Meyers told TheWrap.

“It’s still up in the air, but Cecily comes from that Chicago ensemble world and … she loves playing off of someone, so I wouldn’t be surprised too see her with someone else,” Meyers said.

As sad as he will be to leave the show and weekly news sketch that he has helmed for so many years, Meyers believes that his signature segment is in very capable hands with Strong.

“I was so jealous of how good she was so fast,” Meyers told TheWrap. “She’s so sure of herself, she’s so accomplished. I don’t know why I was surprised — she also had as good of a first season as anyone I’ve ever seen on the show.”

The two shows Meyers will stick around for will be hosted by Jonah Hill (Jan. 25) and Melissa McCarthy (Feb. 1).