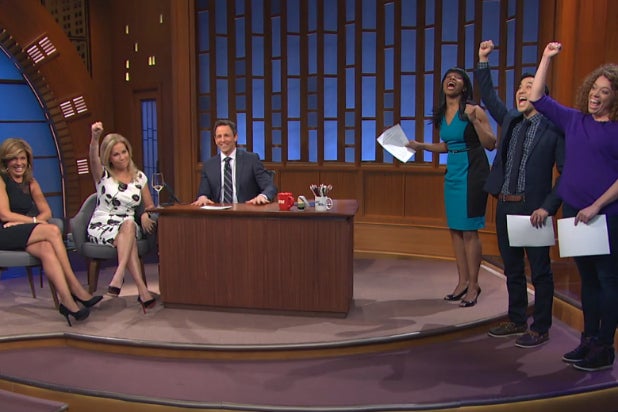 Seth Meyers followed through on an old “SNL: Weekend Update” promise on Monday, when he staged an intervention for Kathie Lee Gifford and Hoda Kotb on his new show, “Late Night.”

Three of Meyers’ writers joined the “Today” show duo on the Studio 8G stage in character to plead for the ladies to get help for their apparent drinking problems.

The first writer played a former guest on the fourth hour of “Today.”

“I’m not surprised if you don’t remember me, because by the time my segment aired, you were both tanked off your faces,” the writer started.

She continued: “Hoda, you were banging on the glass, yelling, ‘You don’t know me!’ to the tourists outside. And every time I tried to talk about my book, Kathie Lee, you would interrupt me and ask, ‘How much do you think I can bench?”

Finally, the third “Late Night” player posed at Kotb’s neglected daughter, Doda Brokaw. “While most kids’ moms were at their piano recitals, you were at a piano bar,” was among Doda’s memories.

Hoda cracked up the entire time, drinking it in (pun intended). Kathie Lee either played it straight, or she may have been offended.

Watch the clip and decide for yourself: