Seth Meyers finally figured out why President Trump has been lashing out so much: “The President of the United States just wants a friend,” the NBC host decided Monday.

Last night’s “Late Night” dove deep into the behavior of our nation’s top executive with another segment of “A Closer Look.” This one covered a wide range of topics, such as meatloaf, the whitest White House photo of all time (pictured below), and yes, Sweden. 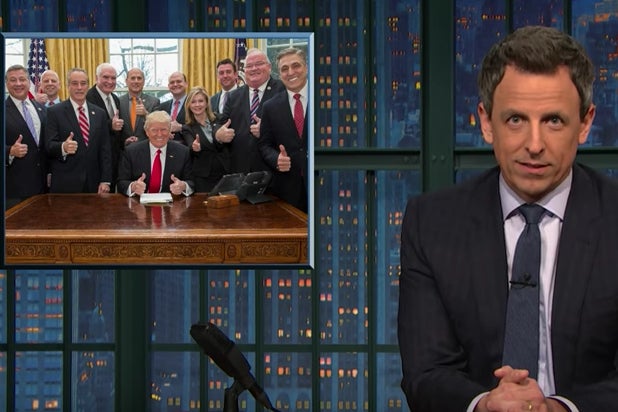 In case you haven’t heard, the Nordic nation is (rightfully) laughing at all of us after Trump mistakingly reported a non-existent Friday terrorist attack there that definitely didn’t happen.

“That’s how bad things have gotten under Donald Trump — we’re getting roasted by Swedes now,” Meyers surmised. “The Swedish Chef is like, ‘Dude, even I don’t understand a word you’re saying.”

Good burn, but Seth’s best joke of the segment was saved for that aforementioned Oval Office pic. Watch the video above, and enjoy a few laughs.

Miller made a splash by insulting a CNN reporter as ”insulting, ignorant and foolish“