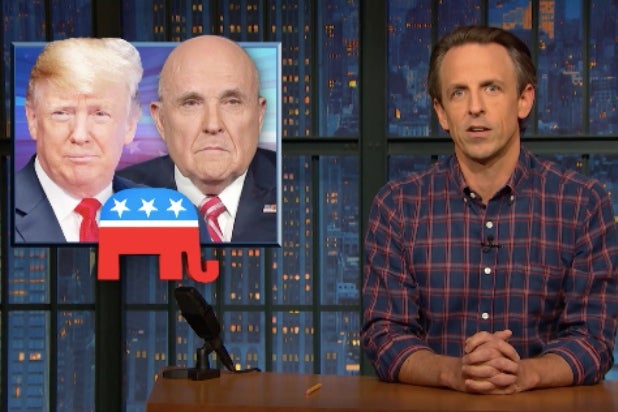 “Late Night with Seth Meyers” had no shortage of jokes about the Trump campaign and its increasingly-deranged efforts to overturn the results of the presidential election, what with Rudy Giuliani’s latest perspiration-filled press conference and Trump’s own manic, all-caps tweetstorms.

During his 13-minute “A Closer Look” segment on Thursday, Meyers likened the sitting president — who has rarely left the White House since losing the election to Joe Biden and Kamala Harris earlier this month — to the famously reclusive novelist J.D. Salinger.

“Joe Biden wants to cooperate with the Trump task force to work on a plan to save lives and get a vaccine out to as many people as possible as quickly as possible. Instead, the president is refusing to concede and trying to stage an incompetent coup — and he’s become a full JD Salinger-level recluse hiding out in the White House and skipping task force meetings on a deadly plague spreading rapidly throughout the country,” Meyers said.

In case you’re not familiar, Salinger was known for more than just his popular novels and short stories, including “A Catcher in the Rye” and “Franny and Zooey.” After the author’s final published work, “Hapworth 16, 1924,” was universally panned by critics, he absconded to a secluded home in Cornish, New Hampshire, where he continued to write a number of novels but refused to publish them. He was rarely ever seen in public for the remainder of his life, but continued to date much younger women whom he would often get to know by writing letters back and forth. His last wife, a nurse named Colleen O’Neill, was 40 years his junior.

Come to think of it, the way Meyers describes Trump’s life, it does kind of sound like it could have been written by a media-scorned, hermit-novelist writing works of fiction alone somewhere in the woods of New Hampshire, never intending for them to see the light of day.

Meyers also ran a clip of a CNN correspondent who reported that sources inside the White House say that Trump hasn’t been to a COVID task force meeting in five months — not even the one held just this past week.

“Of course he’s more focused on the election he lost than on the pandemic,” Meyers said. “I know it was hard to tell from the hundreds of psychotic, all-caps tweets, most of them with warning labels on them, which is insane — at this point we have to put a disclaimer on the president’s tweets like a pack of cigarettes or an episode of ‘Jackass.'”

He added: “Do you realize how long that is? 5 months ago, I was trapped at my in-laws’ house talking to a painting of a sea captain — and even then I apparently was doing more work than the President of the United States.”