Former president Barack Obama continued out on the campaign trail this week, and urged voters not to elect someone just because they used to be on TV. And Seth Meyers agrees with that sentiment, joking that if we continue electing “TV idiots,” we’ll eventually end up with a government run by the cast of “F-Boy Island.”

During a campaign stop in Arizona, Obama specifically called out Republican gubernatorial candidate Kari Lake, who used to be a popular news anchor in Phoenix. “Listen, if we hadn’t just elected somebody whose main qualification was being on TV, you can say, ‘Maybe give it a shot. What’s the worst that could happen?'” Obama said. “Well, now we know. It doesn’t just work out just because somebody’s been on TV.”

“Obama’s right. At what point do we learn our lesson?” Meyers said with a laugh. “We could just keep cycling through TV idiots until we end up with a government that’s just filled with the cast of ‘F-Boy Island.'”

That said, Meyers admitted that there could be some benefits to using aspects of reality TV shows in the election process. In fact, the late night host suggested that maybe we throw out the election process altogether, and simply force candidates to compete in physical tests to become president. 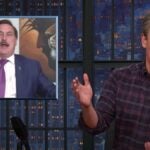 Also Read:
Meyers Mocks Mike Lindell for Claiming He Is Watching Midterms ‘From Every Angle': He’s ‘Turned Himself Into Jigsaw’ (Video)

“Maybe from now on, instead of holding elections, we just make our candidates run through a reality TV obstacle course, and whoever makes it to the end becomes president,” Meyers joked. “I mean, I’d love to see Trump try to make it through the course from ‘American Ninja Warrior.’ He’d try to jump over those floating tiles and immediately end up in the water.”

Elsewhere in Obama’s remarks, he poked fun at Kari Lake’s continued TV appearances, saying “Why would you vote for somebody who you know is not telling the truth about something? I mean, on something that important. I don’t care how nicely they say it. I don’t care how poised they are or how well-lit they are.”

And Meyers couldn’t help but giggle at that too. “It’s just a specific dig, but it also proves that he is in the TV business now too,” Meyers joked.