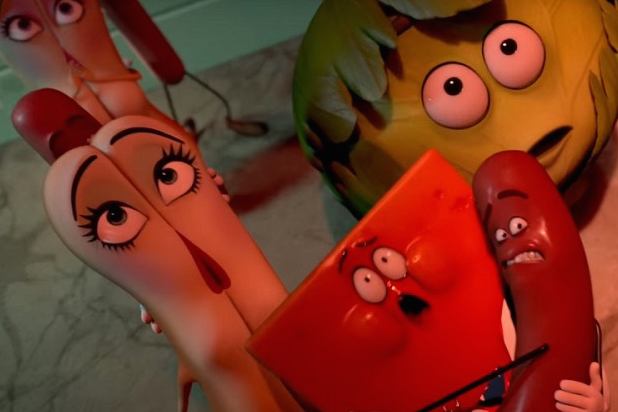 While there are no shortage of adult-oriented animated films in the global cinemascape, particularly in the Japanese tradition of Anime, to mainstream American audiences it’s still hard to shake the association between cartoons and kids movies. But as Seth Rogen‘s new NSFW CGI comedy “Sausage Party” reminds us, things like anthropomorphized food and animals need not only exist for the delight of children.

“Sausage Party”, which reveals the secret lives of supermarket products, premiered in rough-cut form at SXSW this week, and it’s been described as a “madcap crazy salad of industrial-strength raunch, Tex Avery-level visual inventiveness and … seriocomic religious allegory.” This is all very unsurprising coming from Rogen, but there’s still something extra titillating about seeing inappropriate stories told with cartoons – as if they should be watched in quiet corners with stifled giggles.

So to get you ready for the summer “Sausage Party,” here’s a brief history animated films that won’t be screened by your second-grader’s substitute teacher. From an X-rated swinging cat in the Big Apple to war-torn regions in the Middle East, these are the movies that helped pave the way for Rogen and company to make hotdog-and-bun sex jokes with characters that look like they should be friends with Elsa and Buzz Lighyear.

If Walt Disney ever had a “Midnight’s Children”-style opposing force, it was Ralph Bakshi. Bakshi was born in Palestine but raised in Brooklyn and grew up to be one of the most influential animators in film history — and he did not play by the Mouse House’s rules. After spending the first 10 years of his career directing shorts, Bakshi released his first feature, “Fritz The Cat”, in 1972. “Fritz” was based on the Robert Crumb comic strip of the same name, and it followed the titular cat as he explored the sex, drugs and hedonism of 1960s New York City.

The politically incorrect adult cartoon satirized college life in the swinging ’60s, and managed to earn an X rating, making it the first animated film to do so. But it also raked in more than $90 million at the global box office. Fritz was definitely the anti-Mickey, and Bakshi would go on to make many more notable movies throughout his career, such as “Wizards in 1977, “The Lord of the Rings” (yes, the Tolkein one) in 1978, “Fire and Ice” in 1983 and “Cool World” in 1992, which was his last feature length film.

Remember how you felt when Bambi’s mom got shot? Or when Mufasa died? Those moments are all spiritual successors to the grandfather of anthropomorphized animal heartbreakers, “Watership Down.” The beautiful animation and adorably rendered bunnies at the heart of “Watership” belie a deeply tragic tale of a warren of rabbits in the English countryside forced to flee their homes if they want to survive. It features voice work from British greats such as John Hurt, Richard Briers and Denholm Elliott.

Martin Rosen wrote, directed and produced this revered adaptation of Richard Adams’ classic dystopian novel, and it has since been honored with inclusion into the Criterion Collection. Four years later, Rose would successfully adapt another Adams book, “The Plague Dogs,” about a pair of dogs that escape from a testing lab and are hunted down as possible carriers of the bubonic plague.

“Heavy Metal” the movie is a sort of smut classic of animation, with about half the critical response putting in the animation cannon, and the other half calling it trash. “The Chicago Reader” said, “Some of the animation is first-rate, particularly in the more modest comedy segments, and even the heavy set pieces have greater flash and dazzle than anything Ralph Bakshi mustered around the same period.”

“Time Out” felt a little differently: “Fantasies that are gratuitously sexist and Fascist (macho whoring and warmongering), and whose roots reach all the way back to post-hippie paranoia, feed the tangled plot-lines of a movie that… should disappoint even the teenage wet-dreamers.”

A cult favorite even if it wasn’t a critical smash, “Metal” revolved around an anthology of stunningly animated, sex and rock and roll fueled sci-fi adventures. Listen closely and you’ll hear the voices of Harold Ramis, John Candy and Eugene Levy. The sequel that came 19 years later, “Heavy Metal 2000,” lacks the seminal appeal of its predecessor, but if the first one left you wanting more then “2000” should be plenty satisfying.

“Antz” was a little ahead of its time. When Pixar exploded on the scene with “Toy Story” in 1995 it brought with it the new age of 3D CGI animation. Twenty years later, we see how handsomely that bet paid off, so it’s natural that other studios would want to hop on the trend and start cashing in with their own spin on this bold new filmmaking style.

Enter DreamWorks inaugural 3D effort, “Antz,” which came out the same year as Pixar’s second feature, “A Bug’s Life,” but never quite capture the hearts of audiences. It got excellent an excellent critical reception and featured an all-star voice cast with the likes of Woody Allen, Anne Bancroft, Sharon Stone and Sylvester Stallone, but the $100 million movie didn’t even make back its budget at the domestic box office.

Despite the PG rating, “Antz” felt jarringly adult for audiences that specifically associated its visual imprint with the gentler, yet transcendently appealing films of Pixar. It was a little too brassy. A little too hard-edged. (Stallone’s character drinks “aphid beer” and tells Allen’s to quite “bitching” at one point). And it certainly didn’t help that “Bug’s Life” existed as a direct comparison for what could have been in the same calendar year.

History has sort of forgotten “Antz,” but if early stage Pixar was a little too saccharine for you, this DreamWorks production is a nice alternative.

At the height of their powers, “Southpark” creators Trey Parker and Matt Stone could get anything green lit — including a feature-length monument to profanity and violence that was built on paper cut-out style animation. This hard-R movie made more than $80 million at the box office and was nominated for an Academy Award for best original song called “Blame Canada” — which was performed live by Robin Williams on the Oscar telecast.

This, obviously, was just a precursor to their Broadway success with the smash hit “Book of Mormon.” It’s easy to forget that Parker and Stone are two of the most incisive social satirists of our time, and that “Southpark” the TV show is a 19-years-and-running modern version of the “Canterbury Tales,” and it reinvented animation as a relevant story-telling vehicle for the mainstream audience.

The show, and the men behind it, made it clear from the outset of their careers that no one would be spared their razor-sharp commentary. A program that puts Walter Matthau dancing in hell alongside Satan while everyone sings “The Hukilau Song” together — just days after he died in real life — can get away with offending everyone, precisely because they are willing to target absolutely everyone.

When you think of Richard Linklater, it’s easy to conjure up scenes of people just hanging out, of life happening in a warm haze that feels so real it’s like you’re watching your own memories play out with actors living your life. Movies like “Dazed and Confused,” “Boyhood” and the “Before” trilogy make you nostalgic for lives you never lived, but somehow feel intimately a part of you.

And all that makes it easier to forget that the self-taught writer/director is responsible for two of the coolest, most mind-bending animated movies of the past 20 years. In “Waking Life,” Hollywood’s chillest Texan takes viewers on an existential journey through various dream-like realities in which the hero ponders the secrets of the universe with those who cross his path. And while the technique of rotoscoping is sometimes criticized by animators for being a cheap trick — it is essentially tracing over live action footage — Linklater uses it to great effect in this otherworldly existential trip.

Five years later he would use the same animating style for “A Scanner Darkly”, which is a sneaky gem in the filmographies of Linklater, Keanu Reeves, Woody Harrelson and Winona Ryder, who all starred in the film.

Along with “Persepolis” from 2007, “Waltz with Bashir” brought global attention to animation as a tool for telling challenging, realistic and deeply personal stories in a medium most closely associated with fantasy and hyperbole. The autobiographical film written and directed by Ari Folman recounts the 1982 invasion of Lebenon as it is recalled by Folman and other Israeli forces veterans of the conflict.

“Waltz”‘s visual style is similar to the rotoscoping technique used by Linklater in his animated films, but is actually a combination of traditional animating techniques and Adobe Flash. The result looked like comic book panels come to life, and Folman was heaped with accolades across the globe for his hyper-stylized war biopic.