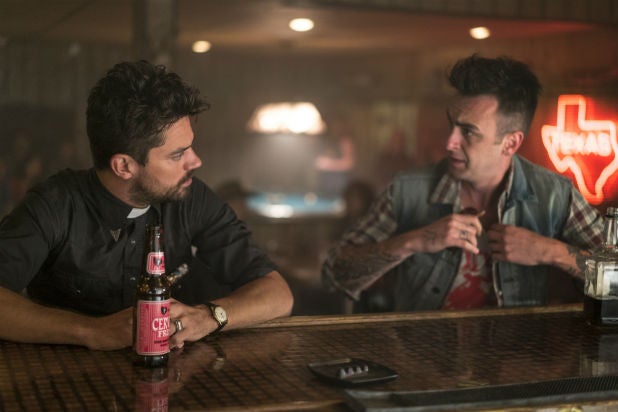 “Preacher” kicks off on AMC this Sunday, ending the decades-long struggle to adapt the Garth Ennis & Steve Dillon graphic novel to the screen.

But what everyone’s talking about is the violence. The show has an epic fight scene on an airplane that shows one guy getting impaled with a champagne bottle. One woman chews off a man’s ear. Bones are broken, blood is splattered. And this is a series about a clergyman.

“I don’t think there’s a line the show won’t cross,” star Dominic Cooper told TheWrap. “What’s great about the first episode is you establish what your three main characters are capable of in these three fight scenes…But [the producers] don’t hold back at all from the violence. They want this to be as true to the comics as possible.”

From executive producers Seth Rogen and Evan Goldberg, the series stars Cooper as Jesse Custer, a West Texas preacher with a mysterious past. After a supernatural experience, he sets out with his ex-girlfriend Tulip (Ruth Negga) and Irish vampire Cassidy (Joseph Gilgun) to find God and ask him to explain himself.

The graphic novels were just that–graphic–featuring scenes of violence that were often used for dark comedic effect. The TV adaptation doesn’t shy away from the violence at all, using it to underpin the more serious and silly moments on the show.

“There’s no channel on Earth that’s going to let you get away with everything going on in the comics,” Gilgun added. “You’ve got to be realistic but make it as ruthless as possible.”

And while the show also deals with many questions of faith and the Almighty, but neither Cooper nor Gilgun had any religious experiences onset.

Gilgun said he doesn’t “believe in a man in the sky,” but doesn’t disparage anyone who does hold religious beliefs. “I’ve got a lot of respect for people who do whatever they need to do to be happy. That’s the most important thing,” he said. “And you’ve got to respect everyone’s faith otherwise it just makes you a prick. But I don’t feel like I need that.”

In the midst of all the gore, Gilgun stands out for his portrayal of the hard-drinking bloodsucker Cassidy.

“They let me by myself,” he said. “They let me run riot and be a total a–hole and do my job…There’s not the right words in the right order to describe it. ‘Thanks’ just feels a bit empty. And they pay me! They pay me to be a complete wanker every single day! And I’ve been doing that for years without making a f—ing penny.”

Also Read: Why Seth Rogen, Evan Goldberg Made 'Preacher': We're Not Doing 'Stupid Stuff for a While'