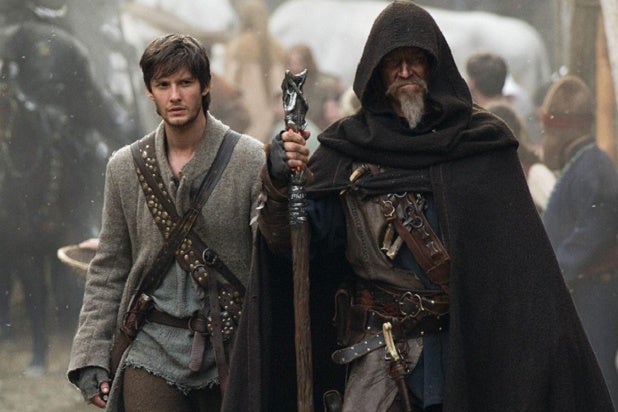 Merlin himself couldn’t fend off an assault like this.

“Seventh Son,” the new fantasy thriller set to open this weekend, is taking a critical beating. Set in a world of magic and mysticism, the film follows a “spook” named Gregory (Jeff Bridges) who protects his country from evil. But as Gregory ages and the evil Mother Malkin (2014 Oscar nominee Julianne Moore) resurfaces, Gregory must train young Tom (Ben Barnes) to fight all the things that go bump in the night.

Too bad he didn’t train Tom on how to enchant critics. TheWrap‘s James Rocchi writes, “I know that it’s an easy joke to suggest that a film should have gone straight to video, but ‘Seventh Son’ feels like it was made to go straight to ‘Mystery Science Theater 3000,’ where its unintentional comedy could be properly celebrated in the appropriate context.”

Believe it or not, Rocchi’s review was among the film’s more positive.

“Bridges mumbles his lines as if he’s a surfer just finishing a bowl of poi before catching some tasty waves. Moore goes for the classic Wicked Witch accent while the wind blows her hair as if she’s doing a L’Oreal commercial. Nearly every time we get the tease of these two great actors appearing in a scene together, Mother Malkin morphs into a dragon. What a waste of talent.”

“When Bridges isn’t too prominent, ‘Seventh Son’ feels like an easily distracted dungeonmaster’s D&D campaign. Tom and Gregory spend most of the film banishing Malkin’s expensive-looking but forgettable CGI monster allies, including a shapeshifting man-bear and a giant, blind troll called a “boggart,” and then exchanging tough-guy quips that would only sound cool if they were improvised while rolling a twelve-sided die.”

Betsy Sharkley of The Los Angeles Times said in her review, “I know it’s early, but ‘Seventh Son’ may actually be the worst movie of the year. It will most certainly be a contender. The medieval/fantasy/action/drama/romance hits pretty close to a perfect 10 on the egregious scale.”

Drew Taylor of The Playlist may turned in had the harshest rebuke of the film when he wrote:

“If ‘Seventh Son’ is to be remembered for anything, surely it will be for containing the single most awful, screechy Julianne Moore performance ever. She can transform less-than-inspiring material into something more substantial. When it was announced that she would play a villainous queen, it seemed like a stroke of genius. She would finally be able to ham it up, but given her innate commitment to her craft, she was expected to fashion a memorable character, but…no dice.”

If it fails to open well, the film would mark the third straight flop of Bridges’ recent offerings after “R.I.P.D” and “The Giver.” Let’s hope, for his sake, that the spook abides.